The Abominable Snowman of the Himalayas (1957)
I don't really have much to say about this 1957 Hammer Film which I watched last night for the first time -- I just knew when I watched a several minute long sequence of this man exhaustively climbing up a mountainside only to dramatically end with him flopping off the side and a shot of his outfit smashing into some rocks that I had a new favorite dumb thing to adore. I love that they didn't even stuff anything into the clothes where this man's body is supposed to be!

That is literally just his snow-suit strung
together into a vague person shape! Ha! 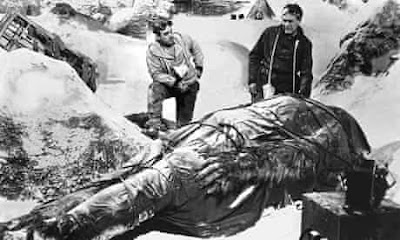 That goofiness aside this actually isn't a bad Hammer movie though? It's slow and subtle but I think its restraint ends up being a net plus, and I like the twist at the end about the "monster." And there are some super gay vibes going on between Peter Cushing and his assistant. A perfect Saturday morning old-fashioned serial-type adventure, is my summation! Hit the jump for links to all of the previous "Ways Not To Die" posts...