Gamera O Gamera, where have you been all my life? Do y'all know about the giant kaiju turtle, friend to all children, with rockets in his shell and his very own menagerie of super-sized monster villains to duke it out against? Yes he was a blatant Godzilla rip-off, but you can never have too many giant monsters if you ask me. But the thing is I've been a lifelong Godzilla fan and yet I'd somehow never seen a single Gamera movie until recently, when the fine folks at Arrow sent on over a copy of their astonishing new Gamera boxed-set... 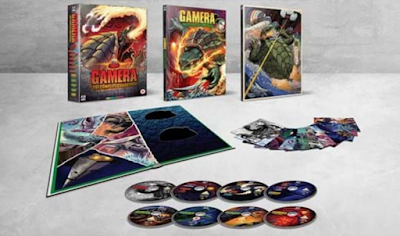 ... which is eight discs stacked with HD versions of all twelve movies, stretching from the 1965 original up to the most recent 2006 film. You can read all of the exhaustive Special Features over on Arrow's site but lemme tell you what -- it's exhaustive. Just beyond. One of the best sets I've come into contact with in all my days and this is coming from someone who hadn't seen a Gamera movie until this set came along! I can only imagine what Nerd Nirvana it would be for a true Gamera fan.

Not that I count myself as anything but now, after diving deep into these terrifically fun movies. I haven't even made it all the way through the set -- I watched the first three films all in one day, but decidedly immediately thereafter that I was doing myself a disservice, rushing through them too fast, so I'm now doling them out about one a week. I just this past weekend made it through the seventh film, 1971's Gamera vs. Deep-Sea Monster Zigra... 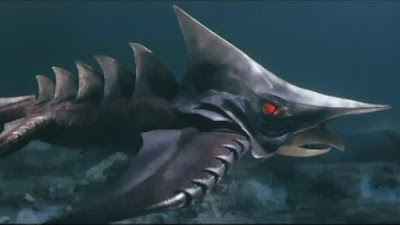 ... which turned out to mostly be an extended commercial for the local Sea World theme park in Japan, including way too much of a sexy space-alien girl running around in a bikini trying to bonk some annoying children on the head. And yet I love them! I don't care! I have loved every single Gamera movie so far. I think, much like Disaster Movies, Kaiju Movies are review-proof as far as I'm concerned -- you show me a man in a turtle costume stepping on tiny bridges and I'm there, with you every turtle step of the way.

AND
AND
AND
A giant headed phallus that comes out of its mouth and shoots white stuff
I rest my motherfucking case pic.twitter.com/djySha5DpY
— Jason Adams (@JAMNPP) July 24, 2020

And my favorite Gamera villain seems to change with every movie -- I loved Barugon in the second movie because (as you see in that tweet) he was Super Hella Gay with his rainbow / mouth-boner attacks, but then Gyaos the vampire bat came along (seen up top, shooting lasers from his cave during the daytime) and I loved him even more! And then there was Viras the telepathic space squid... 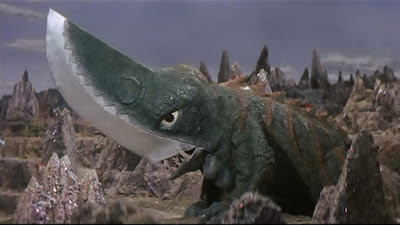 ... and then there's the Lady Villain Jiger, who
impregnates Gamera with a tiny version of herself!

How can you not love that shit? I can't believe I took this long to fall for the Gamera movies, and I cannot wait to make it to the 1990s films and see how they translate this very specific super-cheese of the 1960s / early 70s into that bigger blockbustier decade. What giant monster wonders await!

Any Gamera fans in the house?

Love the production values in Barugon...one of the most beautifully made Kaiju movies ever! But the 90's trilogy is truly next-level stuff, featuring art and craftsmanship that have yet to be matched. The Shinjuki District scene in Revenge of Iris...nothing like it, before or since!

Lots of hot guys in short shorts and not one picture? For shame.