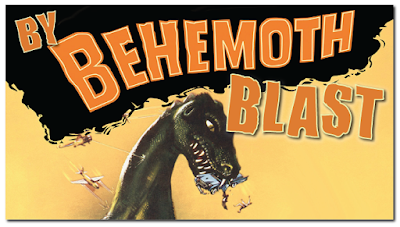 "I’m not sure the British are really suited for giant monster movies. No offense to the Brits, but watching a bunch of folks stand around and keep the stiff upper lip while radioactive monsters from the deep attack London isn’t too much fun."

That quote is from a 2006 review of this movie that for some reason has made its way onto this movie's Wikipedia page -- maybe I should start editing Wiki pages to include my quotes on movies, if that's a thing? Anyway I'll admit the quote summed up a thought I had about the film while watching some of the scenes giffed above, where several of the British ladies charged with doing the "run in terror from the monster" thing hilariously couldn't seem to be bothered...

Entire generations of Japanese Extras did not lose their voices from screaming at an invisible Godzilla monster so that you could gently stroll forward while luxuriously cradling your handbag, Mrs. Danvers. You're not headed to Harrods for tea, lady! But the best of all these stiff upper lippers is in seen among that group of poor folks who find themselves being radioactivated up top...

She is definitely thinking about tea.

I rib because I love. TCM just recently aired The Giant Behemoth on a double bill with the movie it shamelessly ripped off, 1953's The Beast from 20,000 Fathoms, which had its far superior effects done by Ray Harryhausen...

Harryhausen's beautiful beastie attacked ye old standby of New York City, while Behemoth tackles Londontown, so I guess that's a difference... anyway Behemoth's effects were done by Willis H. O'Brien, who will forever be loved and admired for doing the ape called King Kong's stop-motion. The Bememoth's... notsomuch. But I have room in my heart for all of God's creatures...

Hit the jump for links to all of the previous Ways Not To Die...

Ah, but when the movie was made, the British had recently spent six years fighting Nazis and enduring blitzkriegs that destroyed entire cities. Coventry, for instance.

With that history, it's understandable that the Brits were able to "Keep Calm and Carry On" in the face of an attack by a badly-done special effect. Mrs Danvers was probably about to comment to her friends that the monster really looked fake, and what the hell is a behemoth, anyway.