Look at the way the light in the elevator darkens and blooms right before and after this kiss - I know it's been said that Nicolas Winding Refn over-depends on hyper-stylization, but with stylization like this can you really have too much? (The answer is most certainly "No!" by the way, exclamation point included.)
.

Anyway seeing as how I once again fell in rapture with NWR's visuals I went a little bit long capping this sequence, so we'll take the remainder (you know, the actual "die" part that we're here for in the first place) to after the jump...
.


I maybe like Drive maybe about 15% less than its obsessives rate it - I liked it when it came out and I maybe like it a little more now after several viewings, but I think its immediate psycho cult status was a little overblown. I do mean "was" too, the past-tense is important - it was overblown but it might not be now - the film has probably been as influential as Refn crafted it to be. (I mean, she soundtrack alone.)

Small doubts about the film as a whole aside, this sequence is perfect, just perfect, and deserves all the iconic status we can heap upon it. The entire film boiled down to its essence - basically, everything that matters in the movie happens in this minute of film. Sex and violence and puffy silk jackets - when you remember the film, you remember this minute.

Anyway I'm seeing The Neon Demon tomorrow night, which is why we're revisiting Drive today - Demon's reviews seem closer in erratic tone to Drive's generally-considered-disappointing successor  God Only Forgives than they do to Drive's hosannas, but I'm keeping hope alive since everything I read about Demon in theory sounds tailor-made to me and the trailers for the film continue to give my eyeballs orgasms.

I keep reading about walk-outs at press screenings, which I've spent all week trying to wrap my head around - I honestly can't think of anything he could film that would make me walk out of the theater. I sat through the entirety of A Serbian Film for god's sake (even though I still feel bad about that). I just don't foresee Elle Fanning topping that, no matter how hard she tries. 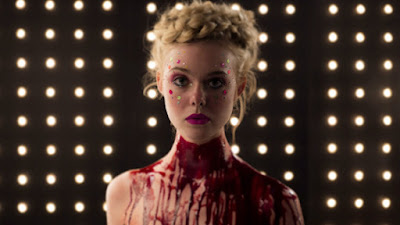 I think it was just the tedium that caused the walk-outs. Because the heroin (?!) is entirely non-responsive during the whole thing, except to trade some barbs which I'm not sure she realizes she makes.

It also wanted to be lesbian-tastic but failed at that as well. But I didn't hate it strangely enough.

It´s good, strange but mindmeltingly beautiful. Still thinking about it since I saw it two weeks ago.