Yesterday was the 9th anniversary of the release of David Fincher's Zodiac -- it was actually released on the same day as Black Snake Moan, both of which I reviewed right here back in 2007. My feelings towards the latter have improved slightly with the years, but my feelings for Zodiac have gone stratospheric; I suppose that maybe has something to do with the fact that Fincher's gotten kind of a bit tedious ever since? 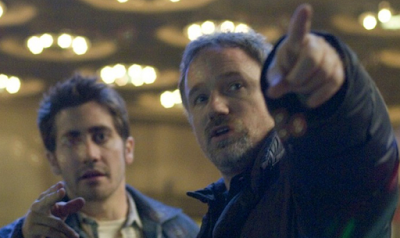 But he was at the height of his powers with Zodiac. I always feel kind of uncomfortable doing these posts when they are real murders being dramatized -- when I did a previous "Ways Not To Die" for Zodiac (you know the scene, the scene at the lake, aka possibly the most terrifying day-time murder ever filmed) I had to lighten the mood with some gibberish about a dream I'd had the night before. I won't bother this time around, but I will share this video talking about the film's special effects, which goes into depth about some of the shots (literally, the gun-shots) you see in this scene. (And if you hit the jump after it you will find links to Previous Ways Not To Die)
.

I LOVE Zodiac. I watched it for the second time a couple months ago, and then again a few weeks ago. Just a great great film. JA I hope your admiration of the film hasn't dropped too far, since we tend to agree on most movies :)

Sorry if that was confusing -- it's my admiration for Fincher that has fallen with his subsequent films, which (give or take most of The Social Network, which I mostly like) generally suck. (I HATE GONE GIRL.)

My admiration for Zodiac has risen in the years since (even though I loved it immediately) because I now see it as FIncher's last GREAT movie. I might even say it's his best although I really really really really adore Seven so that might come undone.

Phew, all is right in fanboy filmdom, haha