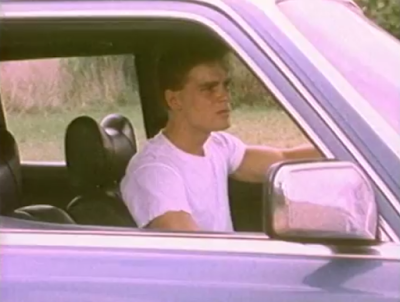 First things first yes that is a 22-year-old Peter Krause of Six Feet Under fame seen there. We'll get to him in a second. But we should do some set-up first - Peter's character is only ID'd on IMDb as "Boyfriend" although I'm pretty sure he does have a name in the film... which I am not going to bother looking up. Boyfriend works.
.

He's just got done screwing around with Girlfriend, aka the film's main character Jill, and even though she's being tormented by people breaking into her house every five minutes - hey there's one running through the weeds now! - Boyfriend needs to go on a beer run. Beer Run Interruptus. He goes to investigate... 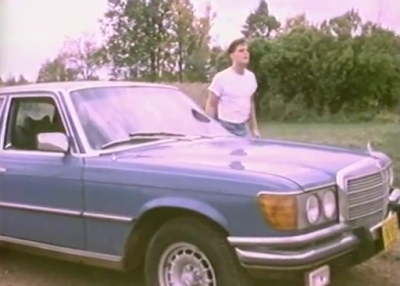 Boyfriend's role in this film is pretty small, all things told, but they sure get a whole lot of mileage out of 22-year-old Peter Krause running around in a white t-shirt and 80s jeans.
. 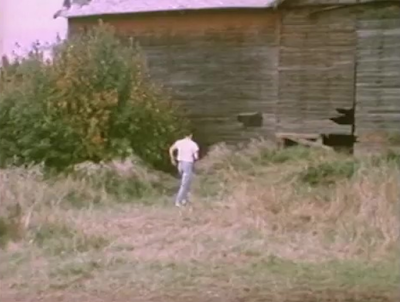 Oh man, Boyfriend, something tells me that sticking your big lunkhead in a strange hole like that isn't gonna go well for you. Not in a movie called Blood Harvest anyway!
. 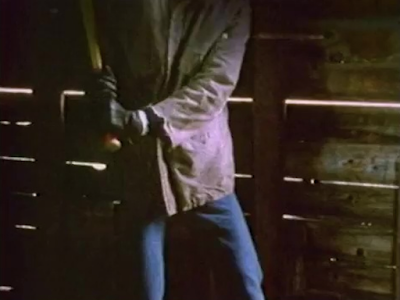 Hit the jump for the all the harvesting, crazy clowns,
and random up-shirt beaver shots that you can handle...

I thought about not including the totally insane cutaways to Jill's out-of-nowhere dance-routine that are included during this scene, because really what the fuck, but where's the fun in that? They happen in the movie, and you have to know that. But then they're hardly the weirdest thing in this movie...

... which stars Tiny Tim (yes that Tiny Tim) as an insane clown posse of one who wanders in and out of the houses of his neighbors uninvited, at least when he's not sweatily singing made-up songs and quoting the Bible to himself anyway. Have I mentioned this movie is fucking bizarre?

It's also sleazy as hell, including several scenes of Jill (and her female friend) being tied up and molested in exhaustive detail, so be prepared for that if you ever feel like venturing to this particular side of the wild side. But in the film's defense it's explicitly about Rape Culture - as much as this insane slapped-together thing is "about" anything, that is - in that it's telling a story about a man who won't take no for an answer. And it leers at the men in it...

... nearly as hard as it does the women. That's more of poor doomed Boyfriend aka Peter Krause above, but there's also Jill's townie friend slash suitor, played by Dean West...

... who gives off some strong "Jeffrey Combs
in Re-Animator" vibes, am I right?
.

This film's about as sleazy as Re-Animator but without those smarts - for all its Tiny Tim Shenanigans, of which there are many, it never really finds a foothold as a satire, and it just stays sleaze. But very very weird sleaze. And you can all see for yourselves very soon -- as I learned at the Brooklyn Horror Film Festival screening of this over the weekend, Vinegar Syndrome is putting this movie out in a super fancy remastered blu-ray edition the day before Halloween! Order it now and spend your All Hallows with this magic: