This scene reminds me of the scene with the black bird and the knitting needles in Dario Argento's Deep Red -- previously celebrated at this link -- although Dario of course done it better. There's a reason everybody remembers Deep Red and not Who Saw Her Die. Actually there are a lot of reasons why that. But we're getting ahead of ourselves.

Who Saw Her Die? stars one-time Bond actor and birthday boy (he turns 80 today!) George Lazenby -- this was actually inexplicably the movie that Lazenby followed up his single Bond film, 1969's On Her Majesty's Secret Service, with. Lazenby plays a sculptor living in Venice whose daughter becomes ensnared in the sights of a child murderer; if you're immediately thinking of Nicolas Roeg's classic horror-thriller Don't Look Now you probably should be! I sure was.

But against all odds Who Saw Her Die? actually came out a year before Roeg's film, thereby ruining my opportunity to accuse this movie of ripping off that much better film, alas. WSHD was directed by Aldo Lado (who is also still alive now, at 85 years); the prior year Lado gave us the extremely strange giallo Short Night of the Glass Dolls, which starred the drop-dead beautiful Jean Sorel and his drop-dead stache...

... click here for more on that. While I prefer Glass Dolls in the Lado Pantheon of early 70s giallo movies -- I mean Sorel Stache > Lazenby Stache alone! -- there are some definite highlights to WSHD that make it worth catching, mostly including the spectacular Venice locations and the truly great score from who else Ennio Morricone. The movie will make you want to watch Don't Look Now as soon as it's over, but then that's true most of the time for me anyway. 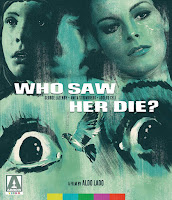 Anyway Arrow is putting Who Saw Her Die? out on blu-ray this Tuesday and it's loaded with special features, not to mention the restoration looks glorious -- those gifs up top are taken from the YouTube transfer but the blu-ray is much finer looking, I promise. If you hit the jump I'll share the special features and then links to all our former "Ways Not To Die"...