Send your hate mail to the director Yorgos Lanthimos, people -- I know how damned touchy y'all can get when it comes to animal violence. We've covered over 300 examples of graphic human carnage for this series but the second I do an animal death I expect pitchforks. Anyway what did that cat expect? He's in a movie called Dogtooth. He needs to take it up with his agent, not me. 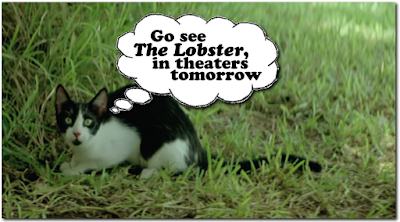 Having never seen this movie I was really hoping it was death by cat, not the other way round.
Cat deaths in media always greatly upset me and make me angry as there's such a staunch contrast with death of or violence against dogs. Death of a dog is held up as a monstrous act of the highest magnitude, pretty much second to baby killing. Death of cats are often either played for laughs or rote steps for killers on their way to their "real" victims.
I know this is mostly an extension of the trope of dogs being "man's best friend," but it also makes me wonder about it also being a manifestation of media's pervasive misogyny, due to women & cats and men & dogs often being paralleled with one another.

I'm not sure if I liked dogtooth or not. I understand what he is trying to say with it, I'm a bit like these parents with my cat (but only because I've lost one by car, one by an idiot hunter, so I'm over protective with the ones I have, my sister calls me dogtooth because of that movie) but if only people outside the house acted normal, it would make more sense and work better.
Of course it was only chosen by the Greek Ministry of Culture to be nominated at the Academy awards because the Minister was his ancle. It was widely reported at the time... (Not that this makes the movie less or more instersting, but it is part of the trivia...)
Sal

I feel the EXACT same way zyzzyva! It annoys the hell out of me how cats are monstrous weirdos (like the upcoming Secret Life of Pets) but dogs are loyal and dutiful companions.

zyzzyva, I agreed with you up until you made this into a case of misogyny. When a woman is killed or harmed in movies and TV shows it is almost unanimously portrayed as a monstrous act that warrants her or others to get vigilante justice and vengeance. As both a cat and dog person, it's likely because cats can be assholes and that's where the stigma comes from. They don't always make the best pets because they do their own thing and can also be antisocial. I was lucky to find a very people-friendly cat, but most of my family and friends who had/have cats are not so lucky.