Although I haven't bothered watching the 2009 Friday the 13th remake since that one time in the theater ten years ago -- ugh -- I can only speak to my recollection, but my recollection is that this movie was filled with awful people and yet this here Donnie (Kyle Davis) guy was among the grossest. He violated every single rule in a two minute span, and even made up some new ones along the way. You flew too close to the sun, Donnie.
.
.
Did you know there are theories out there that the Jason Voorhees of this film is a marijuana farmer? As I said above I've only seen it once but a couple of ideas have passed around -- I do like the one that he maintains the fields of doobage in order to better lure druggie teenagers to his murder oasis, but picturing Jason Voorhees farming anything gets real goofy real quick, unless you picture heads sticking out of the ground a la Motel Hell. 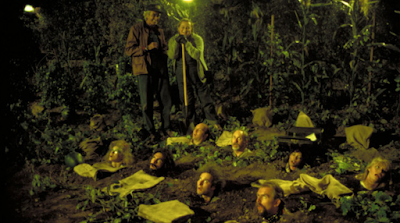 Now that I'm thinking about it a remake of Motel Hell set on a marijuana farm is a hysterical idea -- I've found my millions, y'all! But I actually have a whole 'nother cross-over thought process going on today -- I brought bring up the subject of weed alongside the Friday the 13th movies (which have a long storied stoner history, working its way through every single one of the movies basically) because besides being Friday the 13th today it's also the 50th anniversary of that ultimate ganja gateway experience Scooby Doo! 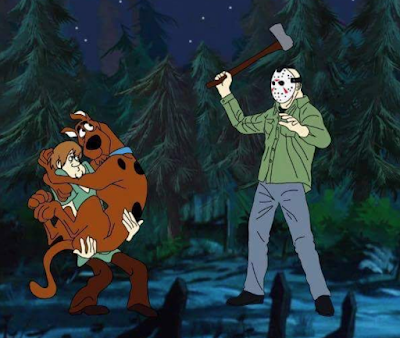 Holy Scooby Snacks, Jason! How people could be clamoring for years for a nonsensical fight between Freddy Krueger and Jason Voorhees and nary a peep about sending Fred and Daphne and Velma and the gang to Crystal Lake I'll never know.  There are suspicious characters -- Crazy Ralph, anyone? -- and masks to be yanked off; there are Jinkies most abundant. And it's pretty easy to cast it with past characters from Friday movies...

I mean now that I think about it the entire cast of the third Friday the 13th movie (which is my favorite for some weird reason I've never been able to really explain -- perhaps it's the disco music theme song) are basically Scooby Doo in human form. 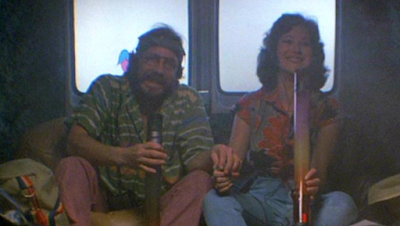 Hit the jump for links to all of the previous Ways Not To Die...