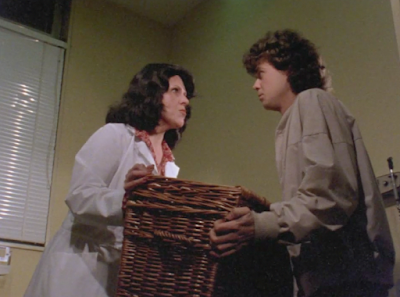 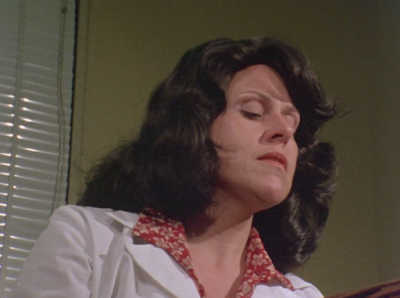 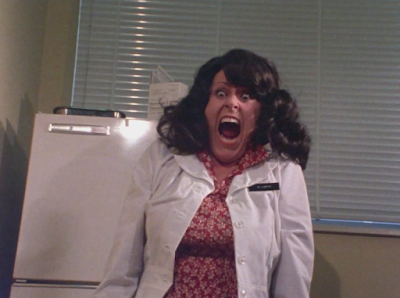 This one gets kind of bloody so I'll spare those of you who don't want to see that stuff (wusses) by taking the rest (which includes a report from last night's MoMA screening with video!) after the jump...
. 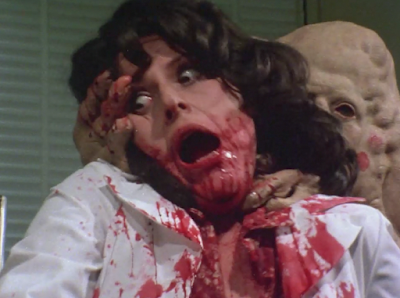 
So everybody agrees that Dr. Kutter is the best character in Basket Case, right? (And of course the doctor... excuse me, the VETERINARIAN... who separates the conjoined twins in this movie is named Dr. Kutter.) We first meet her while she's having a romantic night at home with a half-her-age hot-piece... 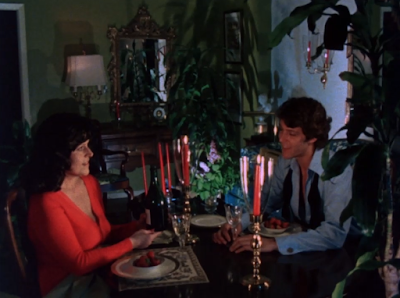 "I like you drunk,
you're cute when you slobber."

Hey lady stop stealing my pick-up lines! Anyway if you follow me on Instagram you saw that I got to see Basket Case at MoMA last night with the director Frank Henenlotter there in person for a Q&A - Frank also made my beloved trash-terpieces Frankenhooker and Brain Damage, so you know he's good people. Also in attendance were several of the film's stars including lead actor Kevin Van Hentenryck (who sat directly in front of me, so I had the privilege of watching Basket Case through his still enormous hair) and Beverly Bonner, who played the friendly neighbor Casey.
.

Not pictured, but also in attendance, were Henenlotter's twin nieces Florence and Mary Ellen Schultz, who play the twin nurses that you see up top discovering Dr. Kutter's flailing scalpel-face. During the Q&A my boyfriend asked about Dr. Kutter (because my boyfriend is awesome) and Henenlotter said that he doesn't know where the actress is now, he hasn't kept in touch with her (for the record her name is Diane Browne and Basket Case is her only credit on IMDb), but the red dress she is seen wearing through-out the movie was her own. Henenlotter said she acted for him previously in a short film and he saw her in the red dress and told her to wear it again. So there's your random fun fact for the day! Goodbye random childhood memory, and hello that.