Look at that sequence of shots - ruthlessly efficient, brutal, and hilarious all at once - and tell me you don't weep for the filmmaker that Dario Argento once was. God he could be so great! That edit of the train conductor's wide open mouth inserted in between the two shots of the man's body being dragged under the train is giving me, ironically, life.

Any fans of this film up in here? I assume so since our Inferno post got a lot of love, although Inferno is a whole different ball o' Dario than this - he'd found himself as a film-maker by that point while Cat o' Nine Tails is still very much aping the giallo films of its day. But in the best way - I liked it quite a bit, watching this past week for the first time. And no not just because its star James Franciscus, who we just gratuitized earlier, looked like he did either. 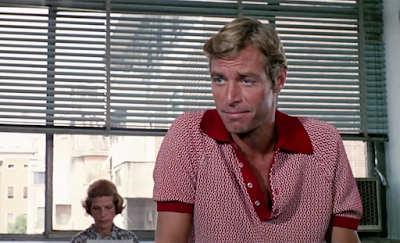 It's stylish and weird and moves at a good pace and has a good mystery that keeps you guessing, and Argento inserts several terrific set-pieces that tip their hat to Hitchcock more often than not. Oh and bookshelves are all over this thing. Delizioso!

Everything Argento did in the 70's is good to great. Eighties continued well for him. It was in the 90's that it began to unravel. But he still had a few decent things left in him - I like Stendahl & Sleepless. But his last several films have been just...(shakes head)

I have to agree with you regarding Argento's career trajectory, but 'Mother Of Tears' is kind of sweet if you see it as an apology letter to Nicolodi, regarding finally acknowledging her contribution to Suspiria (and getting killed over and over...)

And a big family therapy session in the end.

Hey mangrove, I think Mother of Tears is a kind of camp classic but I found it sort of crushingly disappointing at the time it was released. Love your take on it!

I recall seeing "Cat O' Nine Tails" in a dollar theater double feature with "Bird with the Crystal Plumage" as a kid. They really fit in with the 70s antihero aesthetic. And James Franciscus was so hot in this flick. For years I thought he was Italian, one of those blond blue eyed Italians like Terence HIll.