You're right, Tyler Durden. This is interesting. But it's also a bit graphic, so here's my literal Trigger Warning -- only hit the jump if you're up for some (pretend!) gun violence on this here fairly quiet Thursday afternoon...
.


It's Edward Norton's 50th birthday this weekend and add that to the fact that David Fincher has a new season of Mindhunter out tomorrow and Brad Pitt is enjoying career-best notices for a film in theaters and oh right Fight Club itself is celebrating its 20th anniversary come October and well add it all up and this scene for this series suddenly feels like a no brainer. (HA GET IT "NO BRAINER" CUZ HE BLEW HIS BRAINS OUT HA.) 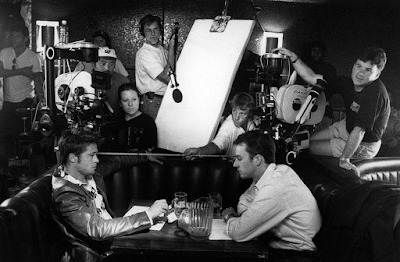 It seems inexplicable now that Fight Club flopped in 1999 but flop it did, hard and dead on the floor like Tyler Durden's carcass, but much like Tyler Durden's (sexy sexy) carcass its flop dissipated like smoke and now here twenty entire years later it's known far and wide as a real something. I think it's a great something personally, but I know its reputation is complicated by the folks who love it non-ironically and don't see the intended satire of it.

I can actually see echoes of this in some of the Tarantino Fanboy Reception to Brad Pitt in Once Upon a Time in Hollywood right now -- Brad Pitt is so ridiculously handsome and movie star sexy (back in the 1990s he was the clear go-to answer for straight guys when asked if they had to do a dude what dude they'd do) and effortless endlessly charismatic that it's hard to see around it when directors hire him to tweak that perception. Both Fincher and Tarantino use him to cloud the viewer's projection -- we wanna be (or fuck) (or both) Brad Pitt real real hard and so we sometimes don't see that "Tyler Durden" and "Cliff Booth" are both (sexy sexy) poisoned receptacles of our desires. 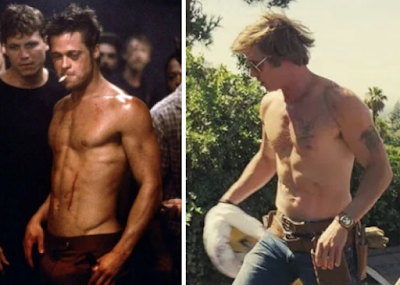 I don't think it's a mistake that Tarantino reminds us of Brad Pitt's Copyrighted Abdominal Muscles -- here is "Modern Masculinity" in all of its contradictions. Virile of course, but an object for our viewing pleasure as well. There's a tension at the heart of what Brad Pitt represents -- as Edward Norton's nameless narrator character says after a particularly brutal fit of suppressed homosexual jealousy we want "to destroy something beautiful" -- and when a film-maker sees that and leans into that, well, we all see ourselves reflected. 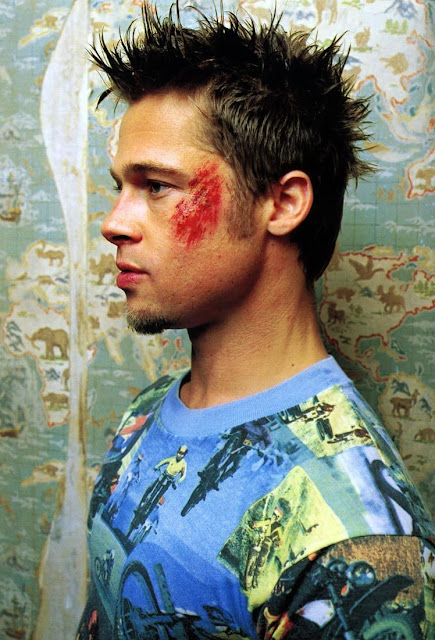