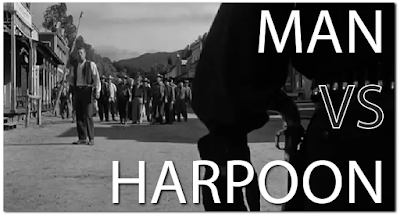 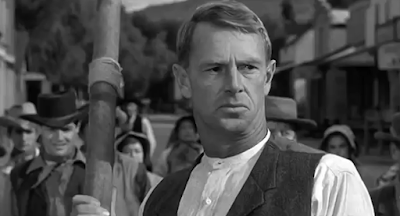 Have any of you heard of the 1958 Western called Terror in a Texas Town? I never had until a few weeks back when I saw that Arrow Video was releasing one of their super deluxe blu-ray editions of it and my eye was caught by Sterling Hayden (certainly not the first time that's happened) and so I checked it out and...
. 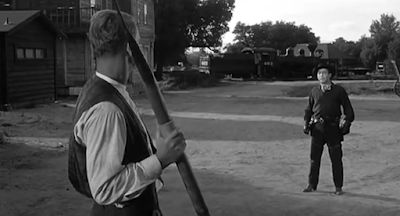 ... it's nuts! It's very very strange. And this scene specifically deserves to be way more iconic than it is. Although... well, it's the ending of the movie, so if you don't want the scene spoiled then don't hit the jump where I shall expound upon it...
. 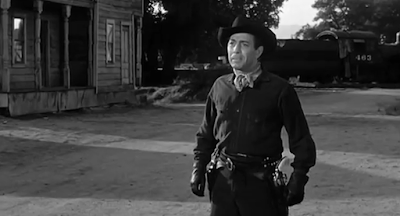 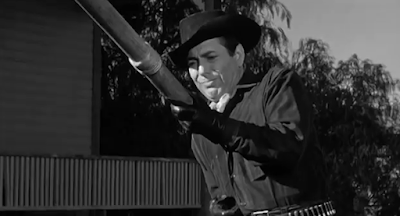 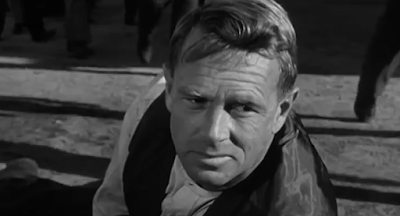 It seems kind of silly to have warned people about spoilers now, since I called this post "Man vs Harpoon" and that's what we get. In spades! This scene is the big showdown between the movie's bizarre hero, a slur-accented retired fisherman Sven Hansen (Hayden) and the movie's bizarre black-suited bad guy, Johnny Crale (Ned Young) - it's like the climax of High Noon but with a gigantic fucking harpoon for some reason. 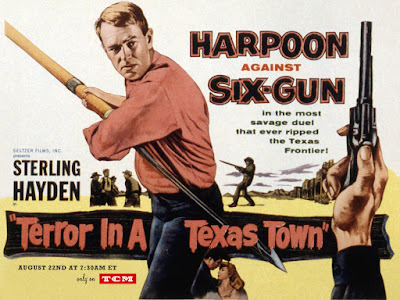 The advertising played this angle up because why the heck wouldn't they - you can hear the 11-year olds enthusiastically making their wagers like their counterparts would years later with Freddy vs Jason or Gozdilla vs King Kong. It's very much in that spirit, but simpler, for a simpler murdering time.

There are a couple of fantastic little docs on the blu-ray's extras that have critic Peter Stanfield talk about the film in context - he puts it alongside other weirdo-Westerns of the period like my beloved Johnny Guitar with Joan Crawford (and again with Sterling Hayden). It fits right in.

The film was directed by Joseph H. Lewis, who also made the far better appreciated Gun Crazy in 1950 - Stanfield goes into what a strange career Lewis had but how there are several diamonds in the rough of his filmography. Have any of you seen this movie? It's surely worth seeking out. 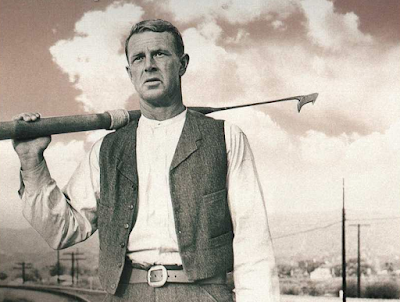