For some reason TCM has been on a James Bond kick lately -- I'm assuming the movies do well when they screen them since they get on these "kicks" a couple times a year -- and that's how I caught this sequence with the character called Jaws (Richard Kiel) killing a shark, no doubt playing up the tenuous connection to Steven Spielberg's Jaws, which'd broken up the box office a year earlier. 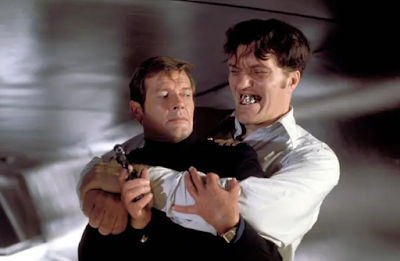 They answered the question of who would win in a fight before anybody knew to ask. Supposedly Jaws was killed by the shark in the original cut of the film but test audiences demanded he win, so they reshot it. That said even though I was delighted by this sequence I'm no Bond expert -- my love for Daniel Craig is the only thing that got me to go back and re-watch any of them and so far I've only managed to watch the Sean Connery ones, making this was my first dalliance with Roger Moore. Golly this was goofy! Should I try to watch another Roger Moore one? Tell me in the comments, please. 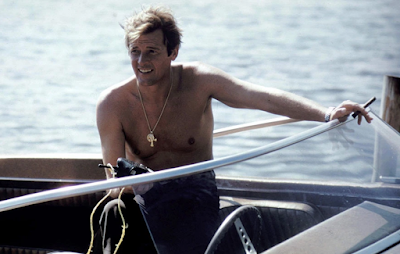 How about Bond No. 2? "On Her Majesty's Secret Service" is great.

It's a matter of preference of course but for me the Roger Moore Bond films are the weakest.

My preference of order would be Sean Connery, Daniel Craig, George Lazenby, Timothy Dalton, Pierce Brosnan and Roger Moore and therefore the films associated with each in their order.

For a major Bond fan, which isn't me though I enjoy the films, the Moore ones would be mandatory but for the more casual viewer I'd say if you've seen the Connerys and Craigs the next place to go should be On Her Majesty's Secret Service with the one shot Lazenby. He's better than he was given credit for and you get the divine Diana Rigg as, in my opinion, the best of the Bond girls.

The Roger Moore Bonds just getting goofier and goofier. Moonraker is a good example.

The fact that Grace Jones isn't even the campest thing about A View To A Kill, makes it essential viewing in my opinion.

if you're gonig to sit thru another, make it the one with Grace Jones. I mean, at least it has Grace Jones in it.

For Your Eyes Only was probably the best of the Roger Moore Bond movies.

The Roger Moore films have a reputation for being the silliest ones of the series, and if that's your preference, then have at it. A View to a Kill, The Man with the Golden Gun and Live and Let Die are personal highlights for me. He's definitely one of the more polarizing Bonds, but he has his fans if you go for the lighter tone to Bond films.

Putting in another bid for you to see A View to a Kill. Grace Jones and a bottle-blonde Christopher Walken as villains. Also, Roger Moore is clearly getting "a little too old for this shit" by the time the movie was made, and it just adds to that camp factor.