Wanna know what's weird? Now that I've done this scene here I have worked my way through nearly all of the death scenes in John Carpenter's original Halloween film for this series, but I still haven't ever done the one that you'd think I'd have gotten to first - the strangely homoerotic scene where Michael Myers kills Lynda's boyfriend Bob in the kitchen.

The famous head-tilt! Anyway I guess remind me
to do that next year. For now, let's talk Annie! 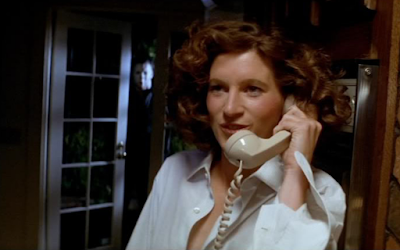 Isn't she just a total bitch? (Totally.) Don't get me wrong, she's one of my favorite Horror Movie Bitches, but she is so unnecessarily mean to her supposed friend Laurie at every opportunity she's given. It's always a shock when I rewatch the film just how horrible Laurie's friends are to her and how inexplicable their friendship seems.

I mean, I get it! I had several people I hung out with in high school that this poisonous relationship nails on the head. But you're never really rooting for Annie to make it out of Haddonfield, ya know?

"Poor Laurie! Scared another one away.
It's tragic, you NEVER go out. You must have a
small fortune stashed away from babysitting so much."