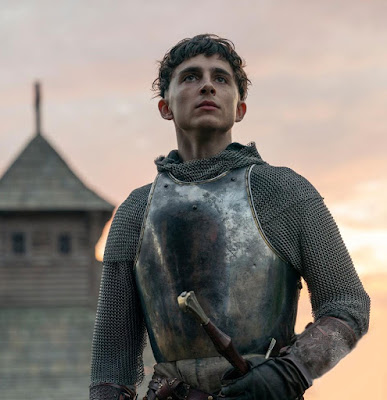 Looks like I missed a couple new official shots of Timothée Chalamet and his wonder-boy bowl-cut in The King, so here those are -- I mostly avoided the reviews from Venice but I generally got the sense that Timmy's typically terrific while the film itself is less so. I did also see some praise for the supporting turns from both Joel Edgerton and Robert Pattinson, although as I mentioned the other day people seem to be a little dumbfounded by how over the top Rob went. That makes me only want to see it more, of course. Click here if you missed this film's trailer -- this movie hits some screens on October 11th and then Netflix on November 1st. 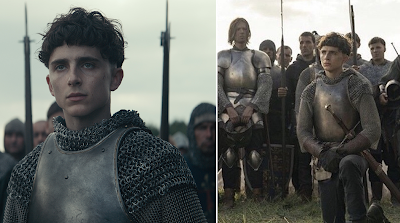 Timothée Chalamet reportedly plans to make this film the first part of a trilogy. I'm looking forward to the sequel, which is tentatively titled "The King's Peach".

(I've used that joke before, often, but it's irresistible.)

Too bad this movie looks like such a colossal bore. Is there no moratorium on historical "epics" we can fight for?

Also, the whispery faux-British could use some work. Maybe Pattinson's so divisive because he's the only one awake throughout the whole damn movie. Haha!

GREAT delivery on that "waking moment" line, though, by Chalamet. He may be super green still, but he's showing some muscle (acting-wise), so good for him for leaping beyond when he was himself just gayer in CMBYN. ;)

I had to, sorry, because I know how biased you are! No harm intended!