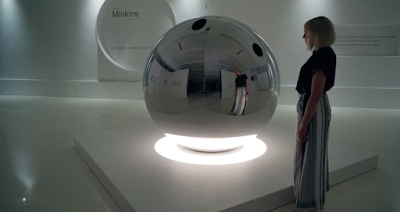 As long as we're separately talking about both Velvet Buzzsaw (here) and Toni Collette (here) today it seems only right to bring 'em together and give some love to my favorite moment in the whole movie (as mentioned in my review). But since the film's only been out for a week and perhaps plenty of you haven't partaken we'll take the rest of this with its stumpariffic spoilers to after the jump...
. 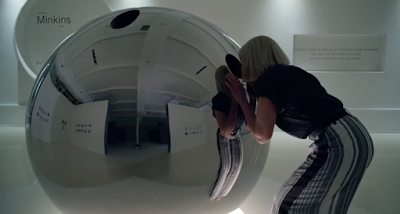 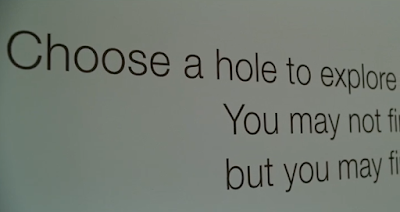 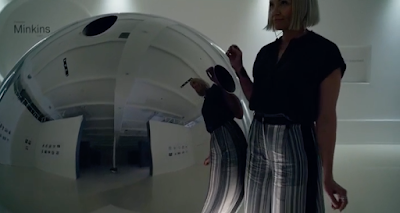 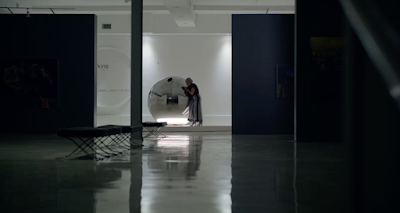 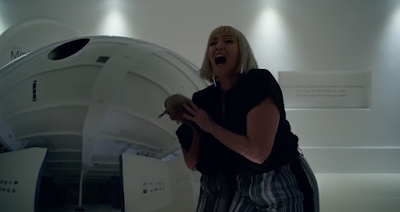 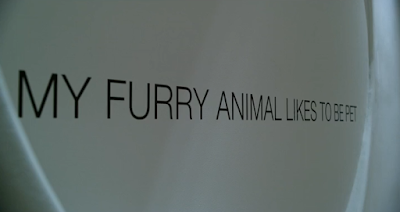 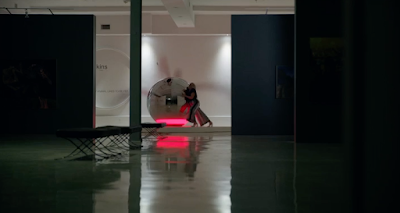 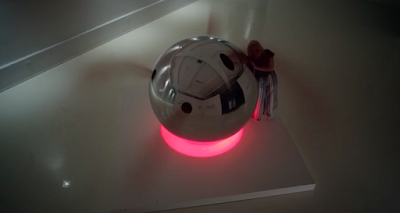 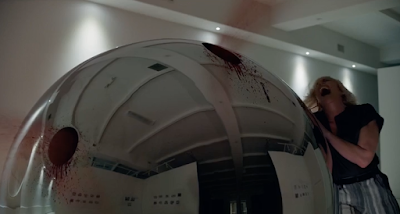 
Now that's what I'm talking about! One of the things keeping this film from being the camp masterpiece it was trying to be was a lack of really gunning right off the cliff -- it keeps pulling its punches in the weirdest ways -- but not in this scene. Nosirree, bub. And it almost didn't happen! In an interview with Thrillist this week writer-director Dan Gilroy said this:

"I came up with "Sphere" because I remember as a kid watching Roman Holiday and there's a scene where Gregory Peck sticks his arm in a hole and Audrey Hepburn shrieks. That always stayed with me. I don't know why it did. But when it came time to write the script, that was the first piece of art that I thought to describe. Something you put your arm in and it scares you and what shape is it. And [production designer] Jim Bissell and other people came in and starting helping the design with it....
There was a time when we first started filming where I really thought we were going to have a minimal amount of blood. Then when we shot it and Toni was sort of pirouetting out of view and we thought, let's green screen her arms so we can do something with that down the line. We started to back up, we added some blood and then we added more blood. And then one day, we decided, what does it look like if the blood spurts out all over the place? Then, suddenly, it's like, let's have the blood hurtling out of the holes of the thing like a fire barge shooting fountains of water. We all just started laughing and it just became this giggly, over-the-top moment of bloodletting."


Giggly! Yes, Dan! That's what we're here for, and I wish he'd had this revelation sooner in the shooting process, because most of the rest of it needs this sweet Guignol oomph. Gilroy name-drops the Final Destination series in this same interview but I'm not sure he's actually seen those movies, given his timidity towards true grotesquerie. Still I will admit that this scene being a Roman Holiday shout-out at heart is pretty effing hysterical...

Classic. Still as much fun as this Velvet Buzzsaw death sequence is it's its nasty punchline that makes it something truly special, when Toni Collette's body gets left in place as part of the art installation in the morning by a clueless security guard, and a bunch of school-children stomp around in her blood...

This brings to mind two things. First it brings to mind that story from 2015 where a woman got stabbed during the Art Basel art fair in Miami and everybody there watching it happen thought they were witnessing performance art. Velvet Buzzsaw actually opens at Art Basel so I'm guessing that story was an inspiration to Gilroy, although I haven't heard him mention it in any interviews.

And second it brings to mind a more obscure story, one that I had a personal interaction with -- in late September of 2006 a man's dead body was discovered in Greenwich Village here in NYC dressed up in full gimp-wear and tied to a fence. Because it was late September a ton of people saw the body there that morning but thought it was a bizarre Halloween decoration of some sort, and so they ignored it. The body hung there for a couple of hours before anybody called the police! Anyway my personal connection to this story was it happened right across the street from my office at the time, and even though I know I didn't personally see the body myself - this all happened early in the morning before I would've been at work - my brain has convinced me that I did see the body; I can actually see it in my mind. Which is strange, but brains are strange... mine maybe more than most.

This was definitely one of the better scenes in the movie.

Although I think Cronenberg could've and would've done something spectacular with this material and with that scene, in my review I actually wondered what Paul Verhoeven might have done with the scene. But they're both close enough to what I was getting at which was the film needed to be sexier - the sex was right there, mixed all up in everything in the story, but it had no edge; Cronenberg or Verhoeven would've mixed up the sex, the art, the violence, and made things really pop. Basically it was right there that that robot had Jake pinned from the back against a fence and the movie did NOTHING with it.

In real life these things would be messier. One outsider artist that the movie kept bringing to mind is Henry Darger, whose art was discovered after he died just like the artist in this movie. Darger created a n artificial little world and ecosystem of little fairy girls with penises that he called "The Vivian Girls" -- it was weird, psychologically fucked up stuff. True, honest, weird shit. Buzzsaw kept skirting around depths like that that it could have interestingly plumbed.