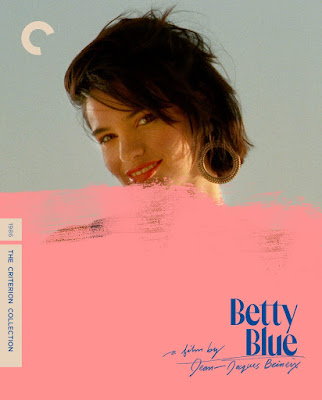 Criterion has just announced their releases for the month of November, and one should obviously be excited about a pair of stone cold Bette Davis classics, All About Eve and Now Voyager (some would argue those are her most essential movies of all), but I can't help but want to highlight their release of Jean-Jacques Beineix's 1986 film Betty Blue starring Jean-Hugues Anglade and Béatrice Dalle as the woman who undoes him and everything around her. I haven't seen BB in several years but I remember it as a difficult film, with Dalle going all in on making this character absolutely maddening. And yet it's all very sexy in that loose French way, and really latches itself onto something true about how a consuming love feels sometimes, I think too. And I think it's kind of great that they're pairing it with Paweł Pawlikowski's fabulous 2018 film Cold War (reviewed here), which is also about a tempestuous love affair dragging everybody down river. What a compare and contrast double-feature these two make!

Re: Betty Blue - My first real partner gave me the book after we heard some of Gabriel Yared's soundtrack in a bookstore. The book, I have cherished most of my adult life. The movie, I failed to connect with it in any meaningful fashion. Read the book if you haven't. It's practically a different story. ~R.