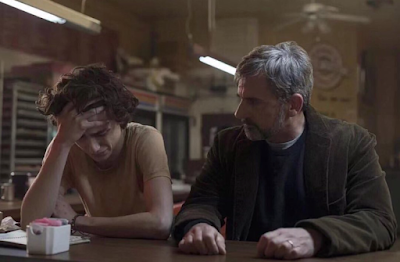 I was really very mostly off-line the whole time I was away this past weekend, save for watching the six-part doc Wild Wild Country on Netflix - which I highly recommend - so I'm still playing catch-up but late or no I still gotta share these three bits of news on my Call Me By Your Name boys. First things there is that shot above, which is our first look at Timmy in Beautiful Boy, his upcoming movie about addiction opposite Steve Carell. At that link IndieWire says BB is out on October 12th, which is also news to me - god I hope he's good (he will be, duh) and Oscar feels like making it up to him for last month's most egregious slight. Next!

We knew that Timmy was making a Henry V movie called The King with Animal Kingdom director David Michod as of a few weeks ago - we also knew that writer and sometimes-speedo-clad-actor Joel Edgerton was writing the thing. But now we know (via Variety) that Edgerton will co-star in it opposite Chalamet. As we noted when we first reported on this story IMDb still has Robert Pattinson listed in the cast but Variety makes no mention of him in their story. There's a good chance he might be left over from an earlier iteration of the film's cast - I guess we'll have to wait and see. (Boo.) Next!
.

.
Now for news on that other CMBYN chap, Mister Armie Hammer. This is another update on a project we rambled about yonder back - we told you in February about how Armie is making a thriller with Babak Anvari, the Iranian director of the fantastic horror film Under the Shadow; well now we've got news on his co-stars and hooray it allows me to post that shot of Armie getting ooogled by Dakota Johnson that I adore so much (a photo that almost singlehandedly, give or take A Bigger Splash, has made me a fan of Dakota forever + ever) because she's on of 'em. (Thx Mac) The other's Zazie Beetz, who's on Atlanta and is in the Deadpool sequel. The movie, which remains title-less, is about a bartender whose life unravels after he forgets his phone at a bar. Sounds Hitchcocky! I like Hitchcocky.
.
Who? Jason Adams When? 3:31 PM