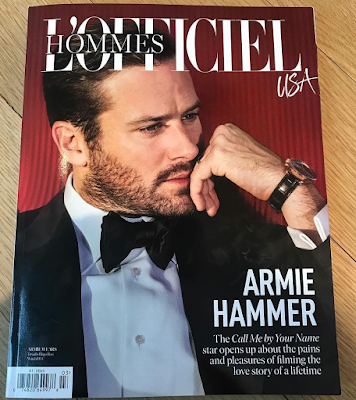 I've been sitting on my thumbs all day thinking about Armie Hammer (yeah I meant what I said) as I waited for L'Officiel USA magazine to actually put the pictures from the above issue online, but so far all we've got is that snap a fan took (via) and my impatience has given way to impertinence because fuck it, I have news to report! Well Variety does, anyway.

"Following his critically acclaimed role in “Call Me By Your Name,” Armie Hammer has found his next project in an untitled Annapurna Pictures thriller. “Under the Shadow” helmer Babak Anvari is writing and directing, with Lucan Toh of Two & Two Pictures, Christopher Kopp of AZA Films, and Annapurna Pictures all on board to produce.
The story follows a New Orleans bartender whose life begins to unravel after a series of disturbing and inexplicable events begin to happen when he picks up a phone left behind at his bar. Annapurna is fast tracking the film, having already set a March 29, 2019 release for the pic."


(thx Mac) We have all seen Anvari's film Under the Shadow right? It's a pretty terrific little horror movie - here's my review of it from way back. I was just wondering the other day what he was up to, and here's my answer, and I love my answer, I want to kiss my answer on the mouth with an open mouth. So there's our answer on what one half of our CMBYN duo is up to next - let's hope we hear the Timmy half (which he hinted at yesterday) soon.
.
Who? Jason Adams When? 2:03 PM