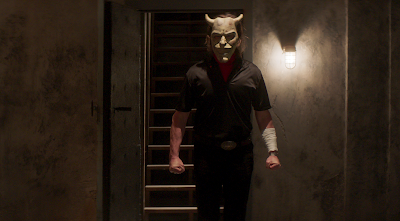 It pains me to have been so hard on the Horror genre as of late. I feel as if I've been tearing up things left and right -- I hated James Wan's Malignant, I hated Neill Blomkamp's Demonic, I just tore David Gordon Green's Halloween sequel to ribbons this very morning. There have been smaller films of my favorite genre that I've adored in the past year, for sure -- Mosquito State (on Shudder right this minute) is great! And lots that have played fests -- You Are Not My Mother, Zalava, Broadcast Signal Intrusion, The Sadness, just a few titles off the top of my head that you should be looking forward to. Anyway I presage this post with all of this because I realize I'm about to come off like more of a troll here, and want to defend myself first. I just want good things for my beloved scary movies! I rant because I love!

And, we arrive at the plot of this post at last: the trailer for Scott Derrickson's new horror flick The Black Phone dropped this morning, and I have heard good things about it. It stars Ethan Hawke as a child murderer who's trapped a little boy in his basement -- while down there the little boy starts getting phone calls from the ghosts of previous victims of Mr. Hawke, and... well, cue scary stuff apparently. I would love for this movie to be good! I wanna be scared! But, cue the Debbie Downer music, I thought Derrickson's much-beloved-by-many 2012 horror flick Sinister, which also starred Hawke, was to me terrible not-scary nonsense. The praise for it totally escaped me. I admitted in my review that part of the issue is I just don't find Ghost Kids scary, like ever, so part of it's on me. But this new movie is also about Ghost Kids! And also that mask is real dumb! It ain't looking good for me again. Here's the trailer: 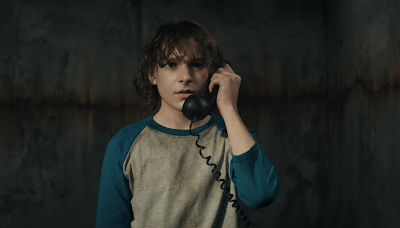 It wasn't the ghost kids horror fans liked those cam corder home movies is what gave it it's sinister edge.

The home movies were def pretty scary, but they took up like what, five minutes of the film? Then the whole last half is just Ghost Kid upon Ghost Kid scare. I'll admit I haven't watched it since that first time though (but why would I)

Feels like this trailer gives a *lot* of the movie away.