To Prick Perchance To Dream 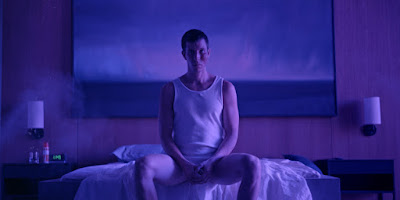 There's something sick in the world. A buzzing in the air, swallowing up the sounds of songbirds, of street noise, of everything not itself -- it's a feedback loop feeding on feedback loops and feedback loops alone, like the helix of DNA strands spinning down and down to the sewer and hell and whatever is past that too. It rains down on us from heaven, by which I mean the tops of skyscrapers, the airless aristocracy sealed off in their sky-light tombs, feebly cackling at their reflections. They can be any color and muted noise they want to be, as long as we're a sickly green leeched of life in response. Roselessness.

Mosquito State (now on Shudder, you should watch it) situates itself in the recent past, the 2007 right before a stock market snafu revealed the chaos agents behind the curtain -- the Mad Men behind the wheel. Can't blame us for not noticing as we'd been stuffed in the trunk, and in the trunk we remain but with a pin-prick of light maybe, one burned into the center of our foreheads like a curse. Never forget, never forget, a better anthem than not breathing, but the big guys will do everything to make us. Remember days without phones? Me neither. Spinning lights twinkle inside my empty sockets.

Once upon a time the world had the structure of honeybees, beautiful golden with purpose -- that's what Richard Boca (Beau Knapp, lurching it halfway to Rain Man and back) called his initial forecasting software, Honeybee, as it analyzed future numbers into the elegant and precise honeycombs of substance, of something, of many things, thrumming with mass and weight and structure. Then the sickness came, invited in by douche-bros and the happy swinging baseball bats between their legs and elsewhere, and bam, bam, like bam, baby gonna crumble.

Communion with apocalypse, mass havoc, a sequence of impossible numbers, Richard Boca goes mad trying to understand a mad future and lo, one whisper to many, in slip the mosquitos, spiraling entropy up up up to the stars, or is that its opposite given where we flail about at the bottom? An axis of two ends with nothing in between and growing more lopsided by the one millionth of a millisecond -- our overlords prick our precious flesh for sustenance leaving pale white slips where we once sniffed wine and smiled. No exit, only mellifluous quicksand, black socks. Your skin stretching to burst. 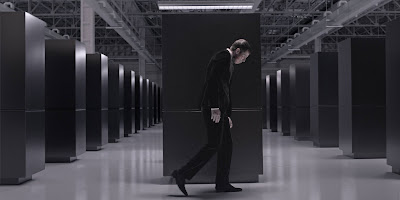