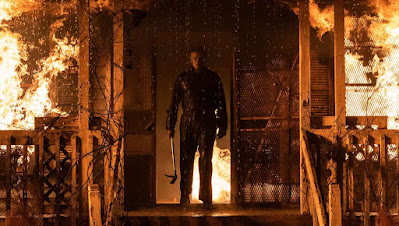 Michael Myers has always been the scariest of the slasher movie killers for me. I think I've talked about this before but I had a nightmare once, the scariest nightmare I have ever had, which involved him, and now the mere sight of that white mask makes me instinctively recoil, my skin crawling backwards on my body like an involuntary face-lift. It's the silence of him, the patience, the spectral ghost-like qualities -- the many mentioned "boogeyman" thing -- that make him stand out. In my nightmare he didn't even do anything -- he just stood there. And that's all it took.

Director David Gordon Green, two terrible Halloween films in now, has proven beyond any shadow -- or should I say Shape -- of a doubt that he has absolutely no concept of what it is that makes Michael Myers scary. His Michael Myers, which he's strained to tie back to John Carpenter's sleek (and still scary!) version so hard that every string has snapped, is a marauder -- a tornado of blunt force trauma. Green mistakes brutality for creeping terror at every opportunity. He's closer to what Rob Zombie had in mind, which was to my mind the previous nadir for the series -- I have begun to think I should revisit the Zombie films after watching what Green's done! At least Zombie tried to reshape the Shape in his own albeit terrible image -- Green is trying to bridge both, but splitting his pants goofball-style in the process. This is good for nobody.

Halloween Kills is a disaster on every level. Not a single character is worth caring about the way Green showcases them. They are all, up to and including the queen Laurie Strode herself, assholes who behave ridiculously, stupidly, hatefully. There's a long subplot here that goes absolutely nowhere about mob-rule -- about Michael being an inflection point for terror that turns good people into monsters. We know this because Green and Danny McBride's startlingly inept script has a character say exactly that. "We're the monsters now." Along with what I think were supposed to be several "cheer" lines, where a another character says something like, "Michael... you came home." Like, that's on the poster, y'all! Wow! My mind is blown! 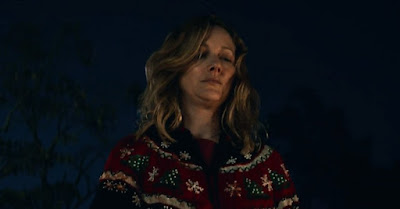 Lowest denominator shit like that, which thinks so little of its audience, is packed so tight into this thing like intestines in a belly, ready to spring forth at any point. (Sidenote: maybe it's just that I was so fucking bored but seeing Jamie Lee Curtis' intestines hanging out at the start of this film, from her last encounter with Michael, that just sent me off thinking about the world's greatest Activia ad for awhile.) I digress -- and I tell you I will probably digress a lot, given the heat of my fury with regards to this terrible film -- back to the subplot about the rampaging townspeople, poisoned from the inside by Michael Myers' Eeeeevil presence. There is no "good" baseline here for any of these characters to fall from. I suppose there's our nostalgia from John Carpenter's original, which Green & McBride are crutching it up with to make us care.

But the characters we've seen in Green's two films? I don't care about these people. I don't care about this Laurie Strode. I certainly don't care about her ridiculous daughter or even worse granddaughter. I sure as hell don't care about Tommy, the little boy from the 1978 grown up and recast into Anthony Michael Hall doing his best tomato-faced harridan routine, leading the gang of townie thugs on their mission to hunt Michael down. (Oh and Hall does some of the the most condescending and embarrassing "I am now talking to black people" behavioral changes ever captured on-screen, which I still haven't pinned down whether that was in character or not, but if it is in character -- all the reason less to give a shit about this Tommy!)

So while that sideshow about vigilante justice spins its wheels saying nothing Michael Myers rampages through town, killing entire packs of firefighters and townspeople in choreographed fight scenes straight out of a Kill Bill film (well a lesser, shittier-choreographed Kill Bill film anyway)  making one wonder where and when Michael picked up all these moves. Will the third film have a flashback training montage to Michael's crazy doctor making him carry buckets of water up and down gigantic flights of stairs and catch flies with chopsticks? I wouldn't be surprised -- Green & McBride love to drop fart bombs of laugh-less humor into the middle of their gore-fest. (If I had to say one nice thing about the film I would give props to the gore, which is extremely convincing and well-executed.)

This entire film is one long wheel-spin until the promised, nay threatened, final film in Green's trilogy, the already titled Halloween Ends, and it's entirely possible that Green has in mind an ending that will satisfy some of the questions he asks, with the precision of an axe to the face, here. But in the meantime what the fuck am I supposed to do with this embarrassingly inept and seemingly pointless movie I just sat through? The two hours I just wasted of my life watching Jamie Lee Curtis roll around on a hospital mattress while packs of wilding med students go shrieking up and down the hallways and somewhere out there Michael Myers is pirouetting in a kiddie park, pulling Season of the Witch masks out of his ass like magic tricks? I know what the Shape is, and the Shape is oblong turdish. 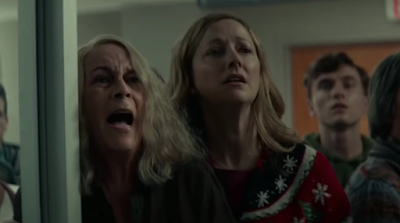 I absolutely loved the 2018 movie -- have watched it 15 times -- I hope that means I enjoy this one more than you. Fingers crossed.

This is why you are my favourite film critic, you give full explanation of your dislike for films and don’t just say it to sound snarky. I was worried about the brutality in Halloween Kills, Michael is far from that, I mean he only killed like 3 people on screen as an adult in the original.
I actually loved 2018 and loved it more with each watch, I’ll have to see how Kills plays out for me. I hope I at least like it because from what I’m hearing it’s by far no classic.
And please for the love of John Waters don’t rewatch the Zombie films

I wasn't a fan of Green's first film but it didn't inspire the entire loathing across my being that this second one did -- JLC was at least given some stuff to chew on, even if I think what it had to say about trauma was incoherent. As for this sequel I recognize that it's suffering from being the "middle part" in a planned trilogy and as such exists, in their minds, as this contained passage of mayhem. But there's no reason in my mind why this story needed to be its own film. This could have been ten minutes long if you excise the junk. It's one of the most unnecessary sequels I have ever seen. It makes absolutely no case for its existence. It's like you can see DGG rolling around in a pile of money when he's supposed to be looking through the camera lens. It made me feel ICKY.

For me JLC is much better than this film deserves.

I think I found a new favorite reviewer. I always thought Michael was the scariest slasher (Jason was my favorite but he was only scary in a couple movies) and I wasn't scared for one second in the 2018 movie. I literally laughed out loud when Loomis decided to kill the cop. Uhhh, what? A twist for a twist's sake is stupid. The first preview I saw for "Kills" and I knew it was going to be bad. Very bad.

Jason, I was talking to my wife recently about how I just can't enjoy a modern movie anymore, with rare exceptions. Boxes have to be ticked, virtues must be signaled, norms skewered, "victims" stroked, and your average decent tax-paying American vilified. In the midst of it all, the things that really matter that you mentioned, such as story, atmosphere, and compelling characters, get glossed over and paid lip service to, at best. I'm with you on 2018. Charmless, surface, vacuous, with a pretty good actor under a good looking mask, doing what he's directed to do. But a lot of time has passed, since then and things have only gotten worse, so I expected that all of the cringe would get turned up to 11. Thanks for your honest review. I know what I'm going into, should I decide to give this a watch. Thanks again.

You didn't like it and it makes me more excited. You suck at life in general.

I never liked the fact that after 40 years Laurie was supposed to be this crazed, survivalist nutbag. I get it; she was traumatized... in 1978!!!! There have been survivors of war who didn't carry on as much as Laurie did in the 2019 film. I think I prefer Laurie as a teacher in-hiding at a private school who has sort of carried on with her life

Like someone wrote before me, your old and sour! Haha.

This movie was great and way scarier than the first two ones. And the killings were tough to watch sometimes (in a positive way).

This is what a slasher movie is supposed to be.

A very hilarious and accurate review. Michael Myers busting moves that would make John Wick/The Avengers blush while the townspeople whipped themselves into a frenzy over a guy who killed 3 teenagers about 40 years ago would have worked if they decided to just make this a straight up comedy.

Killer take down! I will never watch this turd but enjoyed your review.
Jamie Lee is vile. Vile yet lame. The screeching sound you hear is the sound of a barrel being scraped. That Danny McBride has sure turned out to be cinematic poison - don't forget, Danny was in the last nail movie for the once untouchable Aliens series.
I am now off to see if you have yet reviewed DUNe. Kudos