I have some catch-up to do on reviews, but my brain isn't cooperating. I was all distracted with the election, and now post-good-news I just want to sleep for a week. But let us try! Here are some scattered not-all-that-well-thought-out thoughts on a few movies I haven't said anything on yet but have been totally meaning to. (There be a few scattered spoilers ahead.) 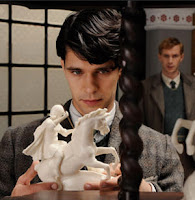 Cloud Atlas -- I really wanted to like Cloud Atlas. I still really love Tom Tykwer, and the Wachowskis always mean well, and the trailer made me cry, and I was ready for a big messy ambitious thing just like this was rumored to be. But I just about hated it. I suppose its trailer should've raised my heckles about the pseudo-spiritual mumbo-jumbo I'd be in store for (a la The Tree of Life, shudder) but I guess I thought perhaps it would be counter-weighted by the over-the-top sci-fi aspects. Instead I spent nearly three hours chasing my rolling eyes around the theater. (If saying "the true-true" becomes a thing I will revoke my commitment to humanity.) For all its jabbering about the "connectedness" of humanity, the film never makes any kind of point. Okay so these souls keep rearranging themselves - to what end? It would attempt to build to these rapturous moments of swirling sight and sound and I was more wrapped up in the sound of the dude snoring behind me than anything on-screen. 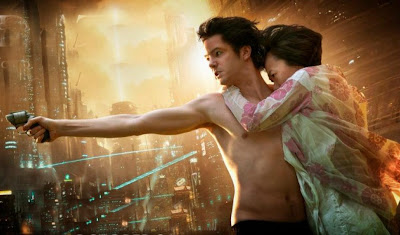 But I will say I would watch two different short films about the Ben Whishaw parts (and the Wachowskis dedication to weighing gay love equally and putting it front and center time and again is truly lovely), and Jim Sturgess made a surprisingly do-able Asian. But, as to the Whishaw point, I felt retroactively bad making fun of Lincoln's wig-fetish in my review of that movie, because watching this movie I was overwhelmed by an actual sense of claustrophobia looking at these actors toiling under all that stiflingly stiff latex.God how could they breathe? I nearly wanted to run from the theater to splash water on my face at times. It's like that scene in Somewhere when Stephen Dorff's wearing the plaster mask, times 1000. 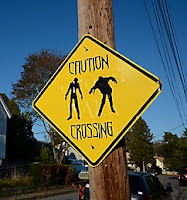 The American Scream -- I had no idea when I watched this movie that it was directed by Michael Stephenson, who made the much-beloved-by-me Troll 2 documentary Best Worst Movie, but watching it at the time Best Worst Movie came to mind anyway. I suppose it's the horror behind-the-scenes look at loveable weirdos connection that did it, or perhaps just a vibe... a vibe I vibe to very much. I've watched TAS a couple of times now and it gets funnier and sweeter each time through. It's bittersweet as well - Stephenson doesn't shy away from the way these men's obsessions have lain claim to their entire lives, and what that means. But mostly it's just good old fashioned bowl-of-spaghetti-as-brains fun. If your favorite holiday's Halloween this is can't miss.

Beyond the Black Rainbow -- I don't know how I sat through the entire running time of this movie, I pretty much never had any idea what the hell was happening, but it was all so pretty! I think if I lived in Colorado or Washington (the new euphemism) I could have legally enjoyed this thing the right way. Sinister -- Cloud Atlas didn't work for me because it kept hitting that "vaguely spiritual" button that's nails on a chalkboard to me, and Sinister didn't end up working for me because it trotted out what is maybe my least favorite horror movie trope - the little child ghost. Up til the kids showed up I was on edge well enough - it has a decent enough sense of building dread, and unlike some opinions I've seen I found the film terribly good looking. All that back-lighting with silhouetted figures in dark rooms! I found it very pretty. Or maybe I just appreciated not having to stare at Ethan Hawke's face as much as I might have otherwise?) But then the little kid ghosts start showing up and tilting their heads to the side like they're Michael Myers by way of those scared kennel puppy commercials and they quite literally murdered any dread or goodwill I might have built up totally and completely, undeniably and reliably, dead. 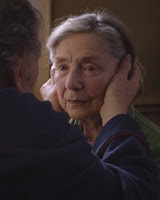 Amour -- Alright this one is way overdue, but it's one (alongside The Master) that's really giving me trouble, words-wise. I found it as emotionally devastating as you've heard it to be, and the performances by Riva and Trignant are what you go to the movies for. Haneke's probably never had a sharper focus, turning this couple's apartment into a series of smaller and smaller and more stifling rooms, until we feel as if we're perched on the edge of the bed alongside them, holding our breath. But what else do I say about it? Okay, there's this: I found his choice to give us the ending at the start his most incisive choice - at every moment of horror and sadness and devastation, I'd get a flashback to that shot of Riva's head tenderly surrounded by flower petals, and I would collapse.
.
Who? Jason Adams When? 1:24 PM

When I 1st saw the ads for the movie it looked really good and then a review in the paper just ripped it to sheds and it doesn't seem to be doing all that great @ the BO. When I read the review it started to sound like a mess. I have to admit a reason to see it is because Tom Hanks AND Susan Sarandon are in it but she probably has 3 minutes of screen time. Guess I'll see it on DVD.

Whoa... Can u be any more insulting in so many ways in so few words?

No, no matter what your fetishistic taste might be, you may not do a yellowface, whose only "Asian" physical trait is slits for the eyes!

Imagine ur boy as a blackface !

Would you think that u could get away with it?

You were just repeating the filmmakers' insensitivity by, inadvertently or not, equating yellowface as "Asian".

....the only thing the makeup artists changed was the eyes—as if that’s the only difference between a Caucasian person and an Asian one, as opposed to facial shape and complexion :

That's right, that Jim Sturgess' twitter is the fail proof evidnece is that behind that purtty face, there is only an atrophied pea brain...!

So, if a clueless white boy who loves to 'charade' as a giggling geisha boy is your thing, go ahead....

Whow...
Interesting... I normally totally agree with you in your reviews.
But I have seen Cloud Atlas twice now - and I really, really love it.
I haven't seen such a feast for the eyes in a long time.
I think they did a perfect job in screenwriting and had an amazing bunch of actors who did a great job.

Regarding the "asian"-controversy: I know that this kind of stuff is on really thin ice in the states.
But I really think all those people critizising the yellow face didn't get the point.
Cloud Atlas had two very prominent asian actresses who are stars in their home countries.
They had 3 amazing african american actors and a few caucasian actors.

So, I don't see dk468's point AT ALL. It is the opposite.
In doing these make ups the movie can genuinly ask these questions.
And there is really by far no shortage in actors of any race, color or gender in here.

I loved Cloud Atlas, usually that style of jumbled up story and religious theme, is not for me. But I loved this one. I love that the director's played with art in the make up category and the music was so beautiful and perfectly themed. It was wonderful to have such interesting romances.

during the sandy blackout i thought about seeing 'sinister' in times square and i'm glad i didn't b/c i would have been scared to go back to my candle-lit apartment... so i eventually watched it today. i thought it was great for mainstream horror of late (eerie sound design & some surprising subtlety), but i agree the kids have got to go. it would be creepier if the focus was on Mr. Boogie.