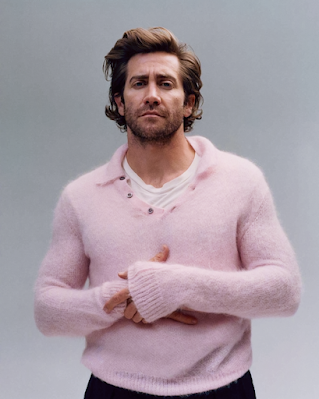 "This is the thing. No one likes to admit this, but, we got beat at our own game. That’s basically what happened. There’s really nothing more to say about it than that. There’s always another project. Sticking your neck out, hoping to get to tell the stories you love and that have been in your heart for a very long time is something to be proud of. And that story, that idea of playing one of the most preeminent Jewish artists in America and his struggle with his identity was in my heart for 20 some odd years, but sometimes those things don’t work out. In this business, if you’re lucky enough to stick it out for a while, we can easily forget that getting to tell the story isn’t the most important thing. I mean, this is our life. Gotta enjoy it. Bottom line, and this may be my Achilles heel or it may be my superpower, but I wish them the best."

With The Guilty out in a couple of days (reviewed here) we're getting lots and lots of Jake content this week (including several other shots of him in that pink sweater seen up top, although somebody was wonderful enough to photoshop the text off of one, much to my eyeball's delight), not that we like it any other way -- this quote comes from a new chat with Deadline (thx Mac) and it's him talking about his Leonard Bernstein project, announced in May of 2018, and how the rival production starring Bradley Cooper and directed by Steven Spielberg came around after (literally nine days later!) and stole their thing. I still think Jake is better casting than Cooper personally, but I guess this officially puts the nail in Jake's take -- I don't think I'd seen confirmation of that before this quote. Sigh. I was hoping it'd be like Capote or volcanoes and we'd get dueling versions! Moving on, some new Jake fashion moments:

And just now seeing Jake in his short-sleeved red sweater on TV this morning and gonna need a moment.... pic.twitter.com/5pNmdex2Ic