Rav Krushka: In the beginning, Hashem made three types of creatures, the angels, the beasts, and the human beings. The angels, He made from His pure word. The angels have no will to do evil. They cannot deviate for one moment from His purpose. The beasts have only their instincts to guide them. They, too, follow the commands of their maker. The Torah states that Hashem spent almost six whole days of creation fashioning these creatures. Then, just before sunset, He took a small quantity of earth and from it He fashioned man and woman. An afterthought? Or His crowning achievement? So, what is this thing? Man? Woman? It is a being with the power to disobey. Alone among all the creatures we have free will. We hang suspended between the clarity of the angels and the desires of the beasts. Hashem gave us choice, which is both a privilege and a burden. We must then choose the tangled life we live.

These are the opening lines of Sebastián Lelio's great film Disobedience, which we called our 5th favorite movie of 2018 -- if you're keeping track (and who wouldn't be) that marks three films in a row from Lelio that've placed in my Top 10s of their respective years, what with A Fantastic Woman making #9 in 2017 and Gloria making #8 in 2014. Needless to say Lelio has immediately become one of my most beloved auteurs, so the realization that it's his 45th birthday today -- and on the day he has a brand new movie hitting movie theaters, no less! -- means we must mark the occasion.

So like I said those are the opening lines of the film, spoken by a man who will die a moment later and set the film's plot in motion -- he is Ronit (Rachel Weisz)'s father and Dovid (Alessandro Nivola)'s teacher, and both characters will come to reckon with the Rav's words over the course of the film. Dovid especially, since he was there to hear them, and feels that this lesson about "free will" holds the key to the tangled life he will live. The entirety of the film's laid out right there in its opening moments, and we'll close the circle by film's end when Dovid will stand in that same place, with his choice laid in front of him. 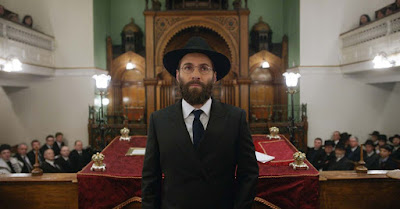 Lelio often deals with these moments where clouds break and sunlight casts itself down on a single path, a perfect blazing moment of realization that burns off the fog. His characters wander, confused and lost, until they aren't -- my favorite means he uses is pop music, which always gets a moment to shine in his movies; the whole of Gloria and its remake with Julianne Moore are built as a lead-up to theirs (I'll say more about that when I review the latter later today) but I think Disobedience's is my favorite -- how does one even begin to think one can get away with using The Cure's "Love Song" as their movie-couple's primary love song? That is an act of insane hubris. It is obvious as a heart-shaped sledgehammer.

And yet isn't love, or can't it be, that bolt of perfect light out of the blue? The most obvious thing -- the clearest vision. The right song at the right moment, when suddenly our lives don't feel in our hands anymore but out of our control, being guided by a force that's blunt and bigger than us -- Love and Truth and all the words that the poets capitalize. Lelio's films time and time again are about watching his characters join their Free Will hand in hand with Fate -- when the course of our lives slip into place, those two things side by side, running, dancing, bounding ahead together.