Take My Whole Life Too 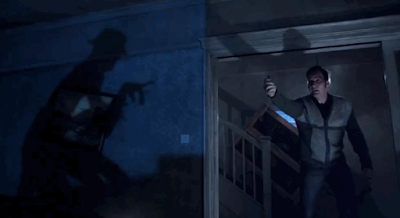 When we saw the first trailer for The Conjuring 2 the above shot was included, and freaked me the eff out. That's a scary image, no? It's weird and funny and wrong and totally transfixing - it makes you want to see more. Well apparently director James Wan agreed, but in this case "more" turned out to be "too much." That shot actually never ends up in the final movie - what does end up in the movie is a CG'd tangle of technicolor monstrosity, a so-called "Crooked Man" (which is admittedly a terrific little moniker) twitching and banging down the haunted house's hallways, poking its Burton-esque umbrella through walls and spoiling all the fun.

It's disappointing because the original film, for all its flaws - and I wasn't as enamored with it as most people seemed to be - knew how to keep itself situated firmly inside its own walls. Yes it was the "everything but the kitchen sink" approach, but of the old-fashioned sort just turned up to twelve - you want some jump scares we'll give you eleven jump scares. That sort of thing. And a lot of the sequel sticks to that routine too, until that blasted special effect, a silly goosed Babadook, stampeded across my patience.

The Crooked Man is a problem, but he's only one trick up the movie's sleeve, and as with the first film it's got more arms than it can handle, so even with some wonky ones some of them still turn out to work. Wan's ripping himself and my preferred horror franchise of his (the Insidious movies) off with that Nun Demon thing... not to mention the Adrienne Barbeau classic The Convent... 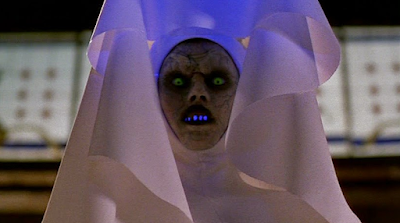 ... but the Nun Demon thing (and every time I write that I imagine Nicolas Winding Refn's film The Neon Demon actually being called The Nun Demon and my mind reels) is a blast all the same, I giggled and cringed every time it showed up. It's perfectly silly and appropriate for this franchise's universe, and I liked it very much. 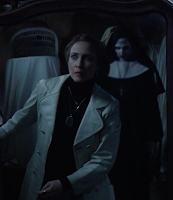 Also as a spoilery side-note do take note of the mid-film scene set inside the Warrens house where Vera Farmiga's at the kitchen table -- if you look behind Vera, and I mean if you look behind her from all the multiple angles the movie shows her from, you will see a certain name that will come in handy to remember for later in the film. It is ridiculous - the name is on every wall of their house, and their daughter is making a beaded-necklace with the name in it.

Anyway I appreciate The Conjuring films and what Wan's trying to do - jumble the haunted house genre into door-creaking chaos for the next generation - more than I ever entirely enjoy them, much less find them all that frightening. Part of me appreciates their dopey sincerity in relation to religiousness, and part of me is unable to suspend my disbelief in order to catch myself up in the fury of its smoke and mirrors and terrible nothingness. Give me more flash-cuts to Franka Potente in a floppy hat smoking and sneering - she's vibing on my wavelength.

I'd recommend instead that you watch the great British TV movie - and original gangster of found footage - Ghostwatch, which tackles the exact same "real world case" as this film does. The scariest moment for me, watching The Conjuring 2, was thinking that someone might summon forth the name of Ghostwatch's sinister specter "Pipes" - now that would've gotten me shaking! 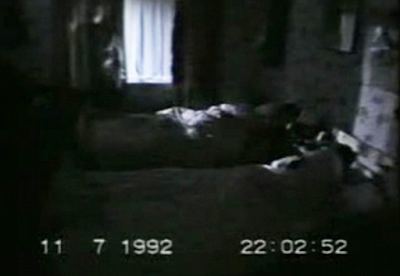 The crooked man irked me too, and took me out of the movie a few times. But James Wan has come out and said that he's not actually CGI. He's played by the same actor that played La Niña Medeiros in the original REC and said that everything was done on camera. So he was either augmented with CGI like in Crimson Peak, or he just moves funny.

Also, i did keep thinking about Ghostwatch while I was watching it. A movie I watched thanks to your recommendation, and I appreaciated that this was a different take on that.

Thanks for the info on what Wan said, Francisco! As you said they clearly used CG to at least augment that character, and they really whiffed it. Which sucks because he could've been great if the design hadn't been so incongruous to the rest of the film. Javier Botet is that actor and he's a phenomenal presence -- I've posted about him before.

One of the Crooked Man's manifestations impressed me because I've never seen anything like it, which is difficult to find in movies like this that keep recycling familiar horror elements. The movie never really scared me, but I had to admire it for Wan's skill and his wonderfully fluid camerawork. That bit where the demon nun uses its own portrait to bear down on somebody was teetering on the edge of humor (in this case, trying so hard to be innovative that it struck me as absurd and almost funny). Maybe the most innovative thing about the movie was its quiet moments of tenderness, which were affecting and welcome.

But, like, wasn't the Crooked Man just a manifestation of the demon? It wasn't the actual spirit... so in the world of the movie, it wasn't real. Which is why it didn't bother me that it looked fake. If any of that makes sense.

Ooh... I'm also stealing this from someone's comment on Collider: "I thought it was great, considering that he was animated as such in the spinning toy. It made sense that he be stop motion-esque in reality."

James -- I totally get that that's what they were going for, but I don't think they made it work visually. The design was bad. There's a way to make it work -- Babadook made something very similar work. It just failed as scary, for me -- I know "what's scary" is totally particular to each person though