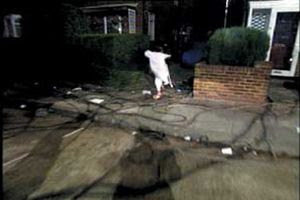 Have any of you guys seen Ghostwatch? (I know you have Glenn, you're the one who told me about it.) It aired on the BBC on Halloween 1992 as a pretend news special about ghost hunters a la Beatrice Straight in Poltergiest or Leigh Whannell in Insidious - there was a big uproar at the time because a large portion of the audience took the movie as truth and subsequently freaked right the fuck out once things went horrifyingly paranormal.

I guess it's a legendary hoax of sorts for the British public, especially people my age who were in their teens when it aired and more likely to get sucked into it, but I'll be damned if I remember hearing anything about it on this side of ye olde pond. It was bizarre watching it last night seeing how much the future found-footage genre of films would come to echo it (I say echo to be nice and assume they weren't outright stealing) - things like the Paranormal Activity series especially, with their little girls night-time horrors captured on grainy footage schtick. But also Blair Witch and Lake Mungo and all the rest.

My point is, Ghostwatch scared the shit out of me, and you should try to see it. (You can find it online if you look around; it's not on DVD here as far as I know. The Beeb has never aired it again because of all the controversy, but they did release it onto DVD over there I believe.) I knew it was fakery from the start but it didn't matter - it worked it way right up under my skin, and I had a harder time falling asleep last night after it than I've had from a horror movie in quite some time. If your room has a window, and curtains, then you might never sleep again!

Seriously though, afterwards I had to check and see how old the writer was, because Ghostwatch effortlessly taps itself into that feeling of being 12 years old and you and your friends telling each other ghost stories, trying to freak out each other, and I wouldn't have been surprised if they'd sourced it to a bunch of kids to one-up each other to see what stuck. (The writer, Stephen Volk, was in his mid-thirties when he wrote it, and he should be very proud.) It uses its miniscule budget wisely, keeping things juuuuust off-screen so the viewer's forced to lean forward, to look hard just when we most don't want to (oh my god that half-seen figure under the stairs!!!), and it edits it all together brilliantly, keeping things just the right amount of dry and boring until it needs to goose us but good. 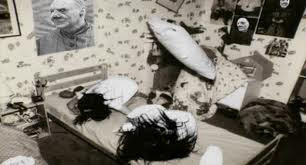 Honestly I don't understand why Ghostwatch isn't more heralded, and why its central figure of terror - a little somebody by the name of Pipes - doesn't rank among the best known of oogy boogies. He's gonna haunt me for some time.
.
Who? Jason Adams When? 5:46 PM
Labels: horror, reviews, The Greatest Movie...

Just watched this a couple months ago! It's insane how subtle the scares are considering this was made for a one-time airing.

Also, it's amazing how similar the final scene in the house is to Blair Witch, isn't it? With all the running down the stairs and looking at somebody hidden in the dark.

Also: You probably don't know who Michael Parkinson is, but those final images of him were perhaps the scariest bit of all.

Adam - I mean to watch the YouTube video that collected all of Pipes appearances in the film, apparently there are eight, but I had to wait because I am still too scared to do it.

Glenn - I read up on who the personalities are after the fact but yeah, none of them were familiar to me at all while watching it. I can only imagine it was even crazier for people who knew who they were, seeing them in these circumstances, because they terrified me - especially that ending which is just so unsettling.

I saw the beginning of this at the time it aired, but my parents sent me to bed as it seemed as though it was going to be too scary. I remember them discussing it the next day at breakfast - at what point they'd twigged that it wasn't real. I had a real sense of having missed out on something.

I saw it for the first time when it came out on DVD a few years ago, and it did indeed creep me out beyond expectations. The deployment of real presenters - Michael Parkinson, Craig Charles (yuck!), Sarah Greene (a kids TV presenter who I loved at the time more than some members of my family, and whose uncertain fate in Ghostwatch would undoubtedly have f**ked me up for years) - is so smart I want to punch the air.