The Hoodoo That You Do

And now I am about to get into giving away things, so be prepared for mild spoilers ahead. See, I bring up the trailer at the start because of a specific point, which I think elucidates the problems I had with the movie as a whole as I saw it. In the trailer we see this game that Lily Taylor plays with her kids that they call "The Clapping Game." It's basically hide and go seek, only the seeker is blindfolded and goes about finding the hiders by making them clap on command. It's a great set up for a scare - you've got a person in a weakened state (blindfolded) totally unaware that they should be scared, being led into a space where all is not what it seems - the tension comes from the fact that we the audience can see what they cannot, and it activates our "Oh hell no don't go in there!" sense that horror movies so thrive on.

So in the trailer this whole thing plays out somewhat predictably, but it's got a great jump scare at the end that utilizes space nicely - those clapping hands do not come from where we think those clapping hands are going to come from. One of the greatest things about Insidious was tricks like this, and I wish horror movies were on the whole better about it - leading our eye in one direction, setting up our expectations for one thing, and then zinging us with the unexpected. In my favorite scare in Insidious, when you see that demon half hidden behind Patrick Wilson's head, that shot smashes a whole bunch of set-up in a way you don't see coming at all. They cut to that shot of Wilson a few times before the demon shows up in the frame, so that last time, when that demon is there but barely there, just around and behind him, you're looking at the shot for a second before you even realize what you're seeing - your eyes are working over the image and it just doesn't gel at first... but when it does, wham. And that's just one example - that film does it enough times that it totally won me over. I don't tend to be a jumper at horror movies, but Insidious had me hopping like Frogger.

So the trailer for The Conjuring with that unexpected clap coming from the darkness over Taylor's shoulder like that, it gave me hopes that Wan & Co were on-board with keeping it smart about playing with the frame and all that jazz in smart unexpected ways. But something happened at some point in the making of The Conjuring - I don't know if they got nervous in post-production or just bored maybe or if the studio wanted it or what, but this unexpected scare has been changed, and for the worse. Now, right before the clap comes out of the darkness there is a ghost voice that whispers I don't even remember what, some stupid shit, and my god does it just murder any momentum dead dead a million times over dead.

It reminds me of Sinister, that recent Ethan Hawke horror flick that was supposed to be about snuff movies but by the end became a terrible hodge-podge of Ghost Kid nonsense (here's my review of Sinister) - I don't know who it is on this entire Earth who finds little kids done up in drug-store quality ghost make-up actually scary, but they need to step off and stop ruining my horror movies. Insidious had some of that in the last act that I try to forget about - all those ridiculous Doll People in the mist or whatever. And because James Wan is obsessed with dolls he crams one into this movie too, never really going much of anywhere with it. 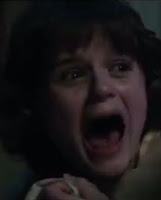 But as I did with Insidious those are flaws that I could look past if the editing and camera-work is lively and on its toes, but I can't think of one scare in The Conjuring that lifted me out of my seat. Okay there is one really terrific (yet brief) sequence, where one of Lily Taylor's daughters is convinced there is something in the room with her - the camera stares and stares and stares at the darkness where she says she sees something, and it's monstrously unsettling. But when the bangs and booms start piling up and the moments come like the one with the clapping game, Wan just can't seem to get out of his own way. Why is that damned whisper there? It doesn't add anything except a complete deflation of all of the tension he'd been building. When the bad things start revealing themselves I can see him straining for the sort of affect he got time and again in Insidious, without result. The camera swerves towards unexpected angles a few times to reveal something, but it keeps feeling half- or over-baked. It keeps feeling as if you're waiting for the scare to come so long that tension turns into annoyance, and then the scare comes right when you're past caring. The rhythm is all off, somehow. 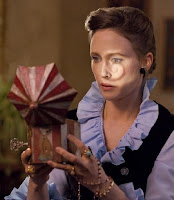 Thing is, I saw this movie two months before it's being released, so I kind of hope they're still in the editing process - there's good stuff in here that can probably be tweaked to make something out of. The actors are all giving it their all. I'm not entirely nuts about the turn it takes in the last act, but Taylor and Farmiga do some great work in there anyway. I do wish the movie were having as much fun as Farmiga's costumes were promising - that collar promised me entertainment of the loopiest variety, but Wan keeps the proceedings pretty much entirely straight-faced. And they need to shave down the Giant Arrows they have pointing towards where things are headed, too - we're willing to follow you; there's no need to shoot off flares illuminating the whole landscape time and again. Can the ghost whispers and trust the silence, and the darkness, and aim your camera deep deep deep into those ever dark spaces. We want to stare into it - it's what we're here to do!
.
Who? Jason Adams When? 5:52 PM

I'm loving Farmiga on 'Bates Motel' and hope to love her here, too. While I am disappointed to hear what you have to say, I am holding out hope that editing and tweaking will save this movie from itself.

I think "The Conjuring" is getting better than average reviews is because people miss the good ole-fashioned horror.

Farmiga is the stand-out, but everyone else seems to be on auto-pilot. The doll Anabel exists just to put Farmiga's daughter in danger, and really doesn't serve any other purpose. I know they want to prepare for the sequel, but I wish they've gone more in depth with the "accident" happened to Farmiga's character.

I also wouldn't make the mother such a lovely figure, then it will be harder for the other characters to see if she's actually a bitch or being possessed. So I think the script can actually be stronger overall.