In June We Gay 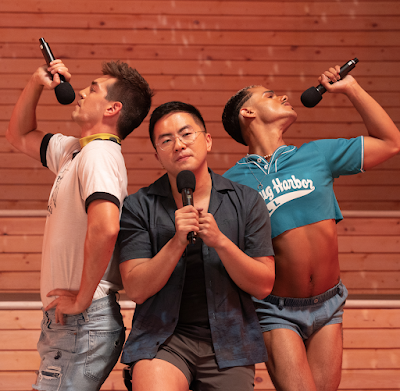 On Monday I shared with you the trailer for Fire Island, director Andrew Ahn's upcoming comedy about a group of gay friends (including SNL's Bowen Yang and Margaret Cho) who storm the gay beach for some gay ol' summer adventure -- that is hitting Hulu on June 3rd, but the night before that here in NYC the film will be opening the Summer Edition of NewFest Pride, and you can buy tickets right this second for the screening and the after-party at this link. The full fest will run for four days with in-person AND virtual screenings -- I'll share the rest of the line-up when the time comes but for right now hit the jump for today's big press release...

NewFest, New York’s leading LGBTQ+ film and media organization and one of the most respected LGBTQ+ film festivals in the world, has announced Andrew Ahn’s hotly anticipated FIRE ISLAND, starring Bowen Yang and Joel Kim Booster, as its opening night feature for the 2nd edition of its summer series NewFest Pride. The announcement was made today by NewFest’s Executive Director David Hatkoff.
Andrew Ahn’s FIRE ISLAND, being released by Searchlight Pictures and premiering June 3rd on Hulu, will kick off NewFest Pride the night before on June 2nd at SVA Theatre in New York City, with filmmakers and cast in attendance at the world premiere, including writer/comedian Joel Kim Booster and “Saturday Night Live” Emmy Award-nominated comedian Bowen Yang, along with actors Conrad Ricamora (“How to Get Away with Murder”), James Scully (“You”), Matt Rogers (“Our Cartoon President”), Tomas Matos (“Dickinson”), Torian Miller (“Chicago Med”), Nick Adams (“The Other Two”), and Zane Phillips (“Legacies”). All ticket holders will be invited to attend the film’s Opening Night party.

Set in the iconic Pines, FIRE ISLAND is an unapologetic, modern day rom-com showcasing a diverse, multicultural examination of queerness and romance. Inspired by the timeless pursuits from Jane Austen’s classic Pride and Prejudice, the story centers around two best friends (Joel Kim Booster and Bowen Yang) who set out to have a legendary summer adventure with the help of cheap rosé and their cadre of eclectic friends. Produced by JAX Media, the film is directed by Andrew Ahn (SPA NIGHT, DRIVEWAYS) and written by Joel Kim Booster.

“We are thrilled to kick off our annual Pride month event with the world premiere of Andrew Ahn’s FIRE ISLAND,” says NewFest Executive Director David Hatkoff. “This joyful film captures the sexy, romantic, celebratory energy of the iconic NY gay enclave, and we can’t wait to celebrate with the film’s cast and creative team with a blow-out, pride-ful event in the heart of NYC.”

"I'm so honored that FIRE ISLAND is world premiering at NewFest Pride this year,” said FIRE ISLAND director Andrew Ahn. “As an alumnus and supporter of the festival, I love the work NewFest does to build community for LGBTQ+ people in New York. I can't wait to kick off Pride with the world premiere of our film and celebrating the importance of chosen family."

NewFest Pride is presented by Chevrolet, and is sponsored by Ketel One Family Made Vodka. SVA Theatre is NewFest’s partner in this event.

Individual tickets to the opening night premiere and party for FIRE ISLAND, as well as all-access passes, are on sale now at newfest.org.

The full line-up for NewFest Pride will be announced in the coming weeks.