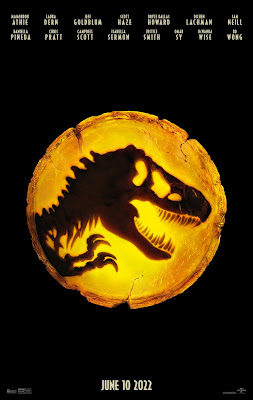 Alongside tickets now being on sale (buy yours here) there's been a big drop of new Jurassic World: Dominion content today, with posters, photos, and a bigger gnarlier trailer than the first one we saw -- they've moved past the "holy shit we got the original trio of Sam Neill, Laura Dern, and Jeff Goldblum to reunite for this!" portion of the press push and now they've arrived at the "Hey we might murder one or more than one of your oldest pretend friends, what fun!" part, which yippee, that's definitely what our collective moods neeed these days. Needless stress, huzzah! Here is the trailer:

I haven't much liked any of the Jurassic World movies so my hopes aren't stratospheric for this, but we will see -- I would love love love to be proven wrong in my pessimism. I very much want this to be good, to capture even a tenth of the magic of the first film. As I've said a billion times the first Jurassic Park was my Star Wars -- I was the perfect age and I went and saw it in the theater fifteen goddamned times! I went every single day the week it was released in 1993. I was a junkie for it. The second and third films have their moments too -- indeed if you follow me on twitter...

... then you know I am currently doing a re-watch of the movies, although I've only made it through the first two so far. And I'm actively dreading getting to the World movies already -- I haven't re-watched a single one of them after seeing them in the theater. They're so cynical, in my mind, so un-awed by what they're about -- Spielberg really made you feel the weight of Crichton's ideas, but the new ones just toss dinosaurs at us like junk-food. To paraphrase what Jeff Goldblum says to B.D. Wong in the first film -- the Jurassic World CG technicians were so preoccupied with whether they could create every single dinosaur and toss it on the screen in a melee of dino-action that they didn't stop to think if they should. Nothing matters in those movies, it's all popcorn, no weight. Anyway I hope Dominion makes itself matter! At least...

... seeing Laura Dern scream her freaking lungs out makes me care automatically, so there's that. This hits screens on June 13th -- hit the jump for a few more photos... 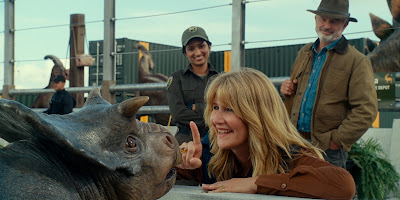 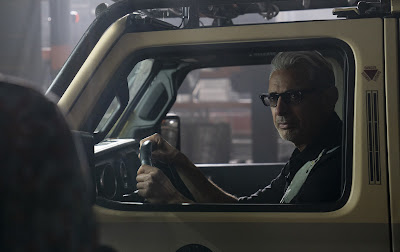 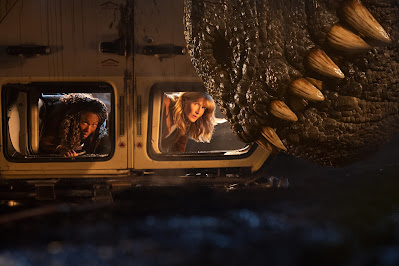 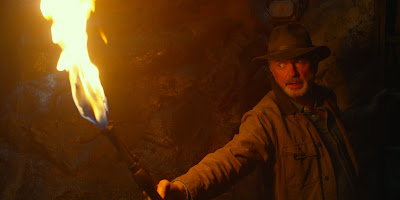 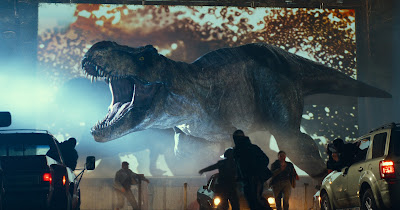 Yeah, the first one was great-then we had the rest. I've only rewatched the first one, I remember hating the second one. All I remember about the last one was 'Dino on the roof!'. This I will stream when it shows up on HBOMax.

I genuinely kind of hate the two Jurassic World movies. I’m sure they believe the first was a commentary on the dangers of nostalgia, but it was itself an example of what goes wrong when you try to recapture the magic of what you remembered liking. The second had this bizarre tone of misery (yay, terrified dinosaurs trampling themselves before dying horrifically onscreen?) followed by another monster movie done better by the mediocre hybrid from the first movie! I really don’t want to see the three original leads in a film from these writers.

I agree with everything you said, Anon. I am straight up dreading revisiting them. There were a couple of scenes in the second one I remember sort of liking but those movies are all well over two hours apiece and that's all I can recall??? From what had been my favorite blockbuster franchise? That is an epic fail on the filmmakers' part