Damn damn damn, just when I thought I was out... the Jurassic World movies have generally been rather terrible and I have hated each one, but seeing Laura Dern, Sam Neill, and Jeff Goldblum all here for the third one... I am not made of stone, I am not made of anything near stone, I am made of viscous gelatinous goo basically, so weak so very weak, and so this has sent me spiraling back to 1993, me being the biggest Jurassic Park nerd in all the land. I saw Spielberg's original film 15 times in the theater that summer. It is a touchstone among touchstones. And so how am I supposed to resist? 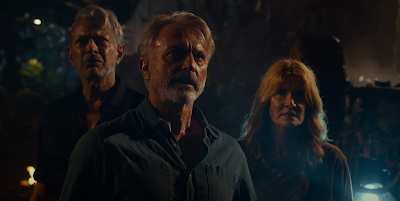 I know this movie will be 85% Chris Pratt and Bryce Dallas Howard running around and I will be annoyed at all of that -- like the last one, how they had like ten seconds of Jeff Goldblum sitting in a courtroom and stuck every inch of those ten seconds into its trailer to try to fool us. But I don't care! Fool me! For the warm nostalgia I am feeling inside from the Before We Were All Dead Inside times I don't care. It's worth it for the feeling I have looking at these photos right now. Here's the damn trailer:
Jurassic World; Dominion stomps out childhoods on June 10th.
And a happy birthday to Laura Dern today, as well! 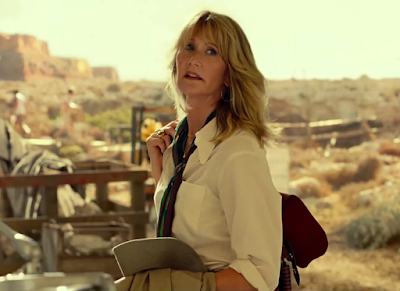 Also, how did it take them all these movies to FINALLY let Dinos rampage through a city!? (Hush, that San Diego sequence doesn't count. It was a tease.)