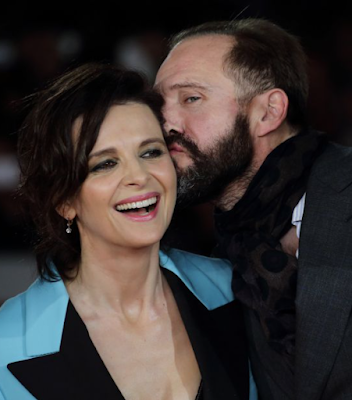 Weirdly I spent some time on Twitter yesterday talking about Juliette Binoche and Ralph Fiennes and suddenly today there is new news of Juliette Binoche and Ralph Fiennes making a new movie together -- hey if I have this sort of power let me put "Oscar Isaac and Kit Harington Erotic Thriller" energy into the world right now, while I'm at it. As for Ralph & Juliette they've previously co-starred in the 1992 version of Wuthering Heights (which is leaving Amazon Prime in a few days and which is what I was yammering about on Twitter) and then in 1996 again and more famously with the Oscar-winner The English Patient. Those two are off the top of my head -- have they done anything else together? It seems possible.

Anyway they are definitely doing one more with today's news that they're going to star in a new adaptation of Homer's The Odyssey, with Ralph as Odysseus and Juli as his wife Penelope -- their spin is this movie will be a drama entirely about the moment when the Big O returns home from fighting monsters and men and finds his wife besieged by suitors, everybody having thought him undeniably and reliably dead. The film will be directed by Uberto Pasolini, who apparently is not related to the director Pier Paolo, but he IS related to the director Luchino Visconti? He's Visconti's nephew? That is weird! Weird information! Anyway this sounds great, I will watch this movie, the end.

Did the 1992 version of WUTHERING HEIGHTS with Ralph Fiennes & Juliette Binoche for today's "Five Frames" post and realized -- I HAVE NEVER SEEN THIS WTF??? It's leaving Prime on the 2nd if you wanna join me and watch before then! Any fans? pic.twitter.com/LF8ohc4d5j

You probably know this already, so please ignore if so, but IMDb has a feature where you can find out whether two people have worked together before. Advanced Search>Collaborations. I use it all the time because my memory is not so hot lol. Besides awards shows, the three films you mentioned appear to be the only times Binoche & Fiennes have worked together.

I did not know this at all, that's an amazing feature! Thanks for the heads-up, that will come in handy!

Sounds EXACTLY like that movie with Doris Day, Move Over Darling. I bet that's where they got the idea.

One of my absolute favorite school assignments of all time was casting this. It was 30 years ago. I had Harrison Ford as Odysseus and Kathleen Turner as Penelope. I was rooting for Kathleen to bring out the sexy in Ford. She had that power at her peak. And Patrick Swayze as the son. It was a moment in time. Ralph is still sexy as hell and Juliette is a goddess. Can't wait.