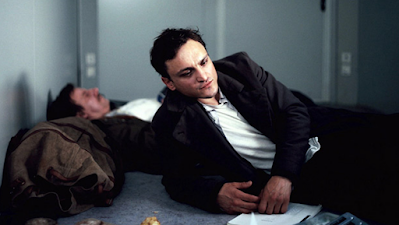 Today we wish one of our top five favorite new working actors Mr. Franz Rogowski a happy birthday! A happy 36th birthday to be precise. And calling Franz "new" is admittedly a bit of a stretch since he's been working for a full decade, but our big time overbearing obsession with him is relatively new, having sneaked up on us over the past couple of years starting with the fantastic Christian Petzold film I quote above. (In related news Transit is begging for a rewatch; I haven't seen it since it screened NYFF back in '18.) 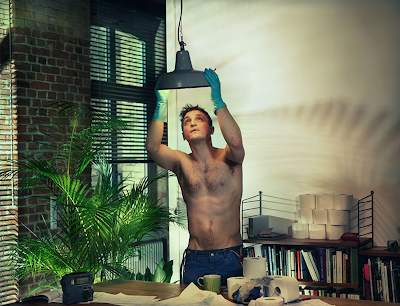 Anyway I really recommend you scan back through our Franz Rogowski archives -- not just because Franz is hella sexy and I have accumulated tons of proof of such, but because you'll see said obsession really gather up everything in its path as the years pass -- I'd say alongside Jonathan Majors he's my favorite actor crush these days (if you don't count the old standbys like Jake, I mean). And his best work by my estimation is still ahead -- I mean that in the general sense because dude's only 36 and one assumes he's got tons of premiere work to gift us with if we're lucky, but also in the immediate sense that I've seen what I consider his best performance just recently, and the film isn't out yet. 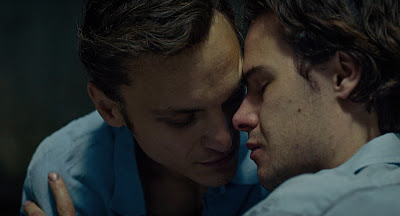 The film is called Great Freedom and Rogowski plays a gay Holocaust survivor  who is rescued from the concentration camps only to immediately be thrown into prison for being gay -- and yes if this sounds familiar that's because I have talked about the movie several times -- I shared the poster here and a teaser trailer here. There's actually a full trailer now though, so now I shall share that.
The movie is shortlisted for the International Feature prize at the Oscars this year, and it's being released here in NYC at Film Forum on March 4th, and as I say -- it's Franz Rogowski's greatest work to date. I haven't stopped thinking about it since I saw a virtual screening of it thanks to the Miami Film Festival in November and I very much recommend you figuring out when and how you'll see it yourselves, as soon as possible. Next up for Franz more gayness as he's playing Ben Whishaw's boyfriend in an Ira Sachs movie! Read my post about that here. We really don't deserve this king, but we got him!

I guess Great Freedom has almost no shot at an Oscar nomination, but I'd be overjoyed if it surprised! I thought it was the best film of last year.