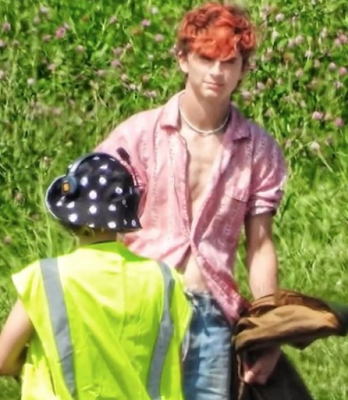 "Yeah it’s a really curious genre. It’s a road movie, but it’s also like a Bonnie and Clyde romance. And they happen to be eating people. So it’s got a very thoughtful aspect to it about things that we inherit from our parents. A little bit like Call Me By Your Name, in terms of discovering you are gay, something you didn’t know about yourself. How do you deal with that?"

That is Oscar-winner and Shakespearean powerhouse Mark Rylance talking to GQ magazine about his next project, Luca Guadagnino's forthcoming film Bones and All, which will probably be out next year (I recently heard that Luca is editing it right now) and stars Timothee Chalamet and Waves actress Taylor Russell as star-crossed human-scarfing lovers on the run in the 1980s. I posted the first photo from the film right here, and a snap from the set right here, but the one up top (from the same day) I missed and it gives a definite better look at Timmy's hair-do. Electric orange, baby! 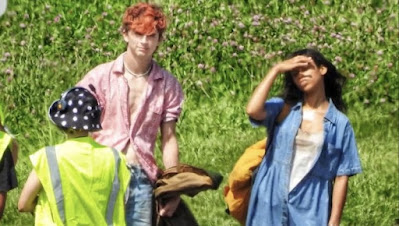 The film happily reunites Luca with his Suspiria writer David Kajganich, which I already knew, but I hadn't looked at the IMDb cast list in awhile and a ton of names are on there now -- besides Rylance there's CMBYN daddy-du-jour Michael Stuhlbarg! Chloë Sevigny (who just gave one of my immediate favorite performances of hers for Luca last year in his HBO series We Are Who We Are)! Also from WAWWA Francesca "daughter of Marty" Scorsese! And did somebody say André f'ing Holland??? Then there's director David Gordon Green??? Huh. Oh and holla... 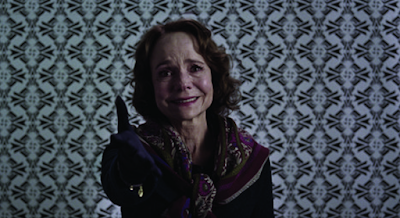 ... Suspiria (both versions) star Jessica Harper!!! Then there's young actor Jake Horowitz, who in the past year has been in the sci-fi flick The Vast of Night (seen below, reviewed here), the remake of Castle Freak (anybody seen that?), as well as Mickey Reece's nun-tastic horror flick Agnes, which screened at Tribeca this past spring and just came out on the 10th. I saw that at Tribeca but have kinda sorta forgotten the whole thing now, and should give it a re-watch. Anyway quite the cast, cannot wait, et cetera et cetera! 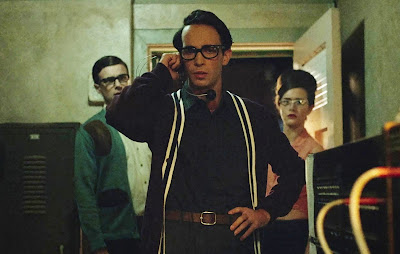 Timmy looks like he's channeling Nick Rhodes with that 'do