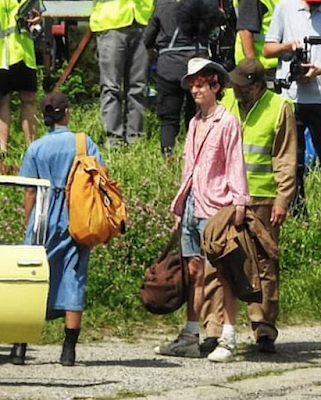 I feel like there's been a lot today, and the hits keep coming -- this here is our first glimpse of Timothee Chalamet on the set of his reunion with director Luca Guadagnino, the super strangely timed cannibal romance called Bones & All that I told you about a few months back. In the blue dress in front of him is Waves actress Taylor Russell, who's the film's other lead. Let's take a closer look at Timmy: 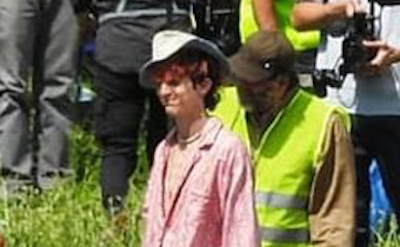 I'm not nuts that there's some We Are Who We Are to his look going on there right? The hair and hat's giving me some real Jack Dylan Grazer vibes. Anyway as you can imagine I am a'quiver with anticipation for this, since Luca can do no wrong as far as I'm concerned -- once day we'll look back at this patch of time, his work herein, with awe. I already do, but I'm awesome. I don't even know what that means -- this day's taken a lot out of me. So let's finish it with a bang -- I shared a couple bonus Timmy pictures in other exciting projects on Twitter just a scorchingly hot sec it ago, which you can see below...

In adjacent-to-this news here is a photo of Timothee Chalamet on the set of Luca Guadagnino's cannibal romance BONES & ALL, as well as new photos from DUNE and THE FRENCH DISPATCH that I missed! pic.twitter.com/q2Hp80xegy