Multi-hyphenate hottie Jim Cummings, upon whom I am currently nursing a megaton of crush, has a new movie coming out in November called The Beta Test, and the trailer dropped today and I have it down below. I previewed this movie back when it screened at Tribeca earlier this year -- it's good! And if you like me are nursing a megaton crush on Jim then this movie is made for you. One thing I love about Jim's movies, which he writes and directs and stars in -- see previously The Wolf of Snow Hollow and Thunder Road -- is he seems to agree with me, that he is fucking adorable, and so he films himself flatteringly for our delighted consumption. On some I might read this as narcissism -- and heaven forbid an actor be found guilty of narcissism! -- but on him it works, because it's what I want. These are just the world's rules, sorry!

Anyway The Beta Test is his leeriest-upon-himself movie to date, seeing him play a Hollywood agent in an endless array of very well-fitted suits (and less, much less) who gets sucked into a dangerous sex game where a mysterious purple envelope shows up inviting him to an anonymous hotel room tryst, and shit, as it does, inevitably goes wrong -- he is very good at playing an escalatingly panicked douchebag that you nevertheless want to have a hotel room tryst with, and he knows it, and so this movie is a treat. It's out in theaters and on digital on November 5th. Here's the trailer:
In related news one of the few and far between highlights of the new Halloween movie out tomorrow, which I otherwise made swift evisceration of in my review yesterday, is that Mr. Cummings has a small role in one of its flashbacks! I had to look for highlights where I could find them among its dreck, and Jim popping up in uniform was definitely one of them. Hit the jump for a couple more gifs of him in the Beta trailer, along with its poster... 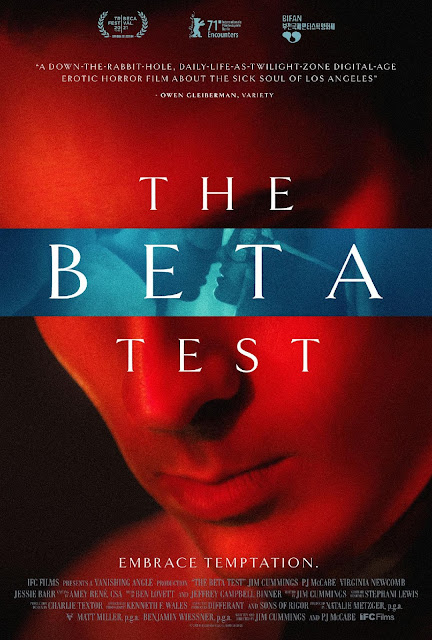 I should def tweet about Jim Cummings more but it always feels weird since he follows me and I don't want to draw attention to myself, saying stuff like he makes my knees weak... I liked THUNDER ROAD + SNOW HOLLOW a lot tho & am psyched to see his new one! https://t.co/WpvTfwPH57 pic.twitter.com/PuVhBZVAkK

Have you seen “Welcome to the Men’s Group”? It’s wonderful!

He is classically handsome but my favorite thing about him, which he played up in his werewolf movie, are his two fanged teeth -- they're a great quirk that adds that extra weird oomph to his handsomeness. Hot! I haven't seen WTTMG -- I will seek it out, thx!

Love his work and he's really handsome but I also miss his adorable moustache in Thunder Road.