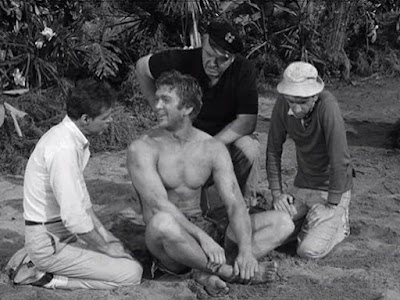 "A true story: In the late 90’s screenwriting GOAT Charlie Kaufman pitched a movie version of Gilligan’s Island where the islanders, starving & desperate, started killing & eating each other. Warner Bros wanted to do it - but Sherwood Schwartz, the creator, said no way... After Guardians I tried to resurrect the idea & wanted to direct. It seemed Warners & Charlie were interested but, this time, the estate of the late Sherwood Schwartz nixed it. Anyway, if the Schwartz estate changes their mind, I’m here."

Although it's weird to think it I think this might be the first time my "Quote of the Day" comes from a Twitter thread? I'm probably wrong about that, my brain is full of holes, but anyway this is Guardians of the Galaxy and The Suicide Squad director James Gunn giving us a window into a better world where he and Charlie Kaufman made Ginger eat the Skipper's face off. I wanna be in that timeline! See the Twitter thread below:

Pitch a movie with two pictures, no caption. https://t.co/siUuPbozqU pic.twitter.com/tg4ZpRp8kH