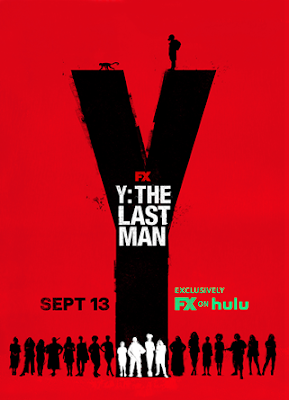 After 15 years of posting about the possibility it still seems utterly impossible to me that an actual honest-to-blog television series adaptation of Brian K. Vaughn's comic Y: The Last Man has been finally shot, edited, and finished, and will be premiering on FX on Hulu come a month from now (September 13th to be precise) -- but they have the receipts, proof, and all that jazz in the form of footage they have been sharing, so what am I to think? An elaborate deep-fake perhaps? This is a cosmic joke being played on me alone? Or it's just a show, premiering on FX on Hulu on September 13th. Lots of different people are saying lots of different things, the truth could lie anyway, man. (I guess I'll find out this weekend since I got screeners of the show this week, holy shit.) If you missed the first trailer I posted it last week -- and here's a new one!

Somewhere inside of him is the answer. #YTheLastMan premieres September 13th, exclusively on #FXonHulu pic.twitter.com/RbIVUZwMgs