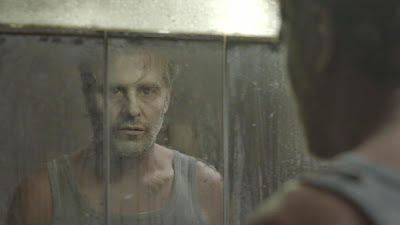 I won't spoil its punchline here, but with a feat of gorgeously goofy technical wizardry the opening shot of Stefan Lernous' new (and first feature!) film Hotel Poseidon -- which is now screening as part of the Fantasia Film Festival -- immediately had my heart, and it never let go not once from there. An absurd bacchanalia of grime and gratuitously bad vibes turned up to a hilarious twelve this is the sort of movie where epileptic seizures are indistinguishable from dance moves, but one thing's for certain -- everything's infectious. It calls to mind Dorothy Vallens whispering, "He put his disease in me" with a little smirk -- Hotel Poseidon put its disease in me and I liked it, I liked it!
Set entirely inside the dilapidated (and that's putting the mildew mildly) hotel of the title, Hotel Poseidon nevertheless never feels trapped inside itself -- there's certainly a claustrophobic sense, but the sort that comes from being freely able to move in between a thousand suffocating small rooms, each one more insane and psychedelic than the last. The film has that same theatrical pop-up-book vibe to it that Joe Wright's adaptation of Anna Karenina managed -- this world is plainly false, a series of rotating false walls and shifting floors to indicate movement and space, but such space, such movement, such cinematic life! Only instead of Wright's pretty and delicate snow-globe here we're trapped in something more like a turtle tank -- green slime skimming the surface, the funk of forty thousand years in the breeze.
The man who runs the hotel is named Dave (Tom Vermeir) and the entire movie's plot, as such exists, is "a day in the life of" -- beginning with the sound of his neighbor beating off to the screaming sound of cooing anime porn, and ever-crescendoing from there. That said a "day" might possibly be "ten lifetimes" given the way time sorts itself out within the Poseidon's walls, but it's vaguely day shaped I suppose, so we'll say it's a day. Not soon after waking up Dave discovers the dead body of his aunt and he also meets a "cute" young woman (those quote-marks are meant to indicate that she just has less spackled-on zombie make-up than all of the other characters do, which manages to render her less immediately repulsive to our eyes, hence "cute"). These two quick events will go on and shape the rest of Dave's day from there... "day" again being an idea more than, you know, time or whatever. 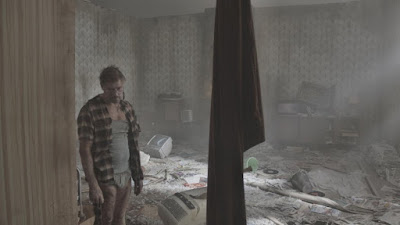 One gets the immediate sense that Hotel Poseidon is meant as a loving send-up of the films of Rainer Werner Fassbinder in some ways -- granted it's Belgian not German (the characters speak Dutch) but the eye-gouging wallpaper patterns; the boxy mid-century frocks all seeming scratchy and tight and like they weigh a thousand tons apiece; the greasy hair and fingers... everything just reeked of depressed Fassbenderianism, as a gag. When Dave starts a conversation with one woman at a party the scene devolves immediately into an outrageous litany of the horrors that she experienced in childhood, the oneupmanship of each one becoming funnier and funnier as they go along -- is there anything more Fassbender than Misery as the ultimate punchline? (On that note there is a joke about cremation in this film that had me laughing so hard I had to pause the movie to calm myself down.)
Another film Hotel Poseidon brings to mind is Fatih Akin's 2019 picture The Golden Glove, which if you've seen that movie (which I loved, and then felt slightly icky about myself for loving) then you know these projects I am talking about here are to the limit an acquired taste. Hotel Poseidon is far less aggressively antagonistic than Glove was -- there's not nearly as much violence -- but the worlds that these films inhabit could be next-door neighbors, like some sitcom and its spin-off from hell. The wretched horror of a serial killer from Glove could most definitely live in the attic space of this Hotel without calling a solitary whiff of attention to himself -- Dave and he have had drinks at the bar, for sure.
Since there's not a lot of plot to go over -- Dave's attempt to deal with his aunt's death spirals into all sorts of outrageous shenanigans, with most of the logic between each step being of nothing but the surreal Dada sort -- all I can really sell you on the film with is the vibe, the on-screen ingenuity, the incredibly funny script, the beamed-in-from-another-dimension performances... these are a lot of things! Stefan Lernous, making his feature debut with this, astrally projects right out of the gate -- I want to watch the next ten movies from this guy right this minute. And if they're all set in the infernal purgatorial waiting room from Beetlejuice like this one is then so be it, I'll devour them all, with the world's loudest happiest and heartiest belch to follow. 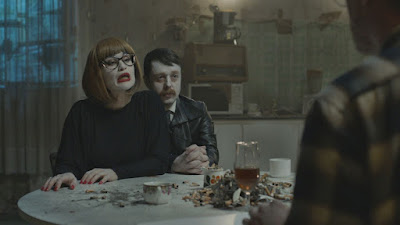