Once You Go Green...

A24 has really been edging the hell out of us with David Lowery's film The Green Knight, which was set to come out last year and which like a delicious carrot on a string they keep push push pushing away date-wise, dropping awesome little crumbs along the way. None have been so delectable, of course, as the news that there might be gay shit going down between star Dev Patel and co-star Joel Edgerton, but everything... 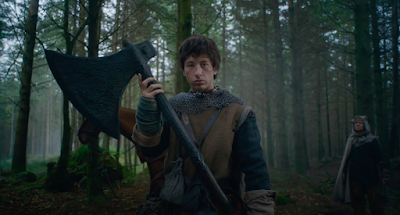 ... about this movie has me excited! Like how we get our first glimpses of Barry Keoghan and Sean Harris in a new trailer dropped this morning! I'd actually spaced on Barry being in this, so...

... seeing him pop up here was a tip tip happy surprise. I'd also forgotten Sean Harris was in this too, but he's less of a surprise given Sean Harris seems to be contractually obligated to be in every single movie these days. We are not complaining we love Sean Harris! Although every time I see him I remember the scene in Prometheus where the alien's acid blood melts his space helmet to his face and I have to go sit in a dark closet rocking back and forth for a bit (I told you, suffocation terrifies me!) But... 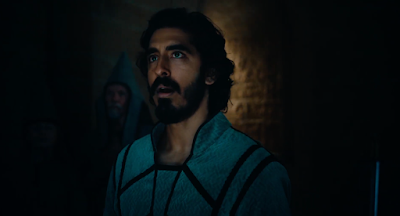 ... let's think happy thoughts. Like how good Dev looks. Ahhh, Dev. The luscious locks, the bushy beard, the high collars and golden crowns -- he rocks it all. Anyway The Green Knight is now set to come out at the end of July, on the 30th specifically. We're waiting!
Who? Jason Adams When? 10:24 AM
Labels: Barry Keoghan, Dev patel, gratuitous, horror, Joel Edgerton, trailers

I just wondered who is going to have a graphic nudity in this film. ;) Can’t wait to find out!

The talking fox!!!! This movie has me so excited. Here in Ontario we are still stuck in lockdown hell, but rumors are that things will be opening up this summer. Guess this will be my first movie back! SO excited