I always hesitate to write about how my worst fear in the world is suffocation, because I have this image in my head of some Jigsaw motherfucker out here on the wilds of the internet noting that down in their torture spiral-notebook for when they inevitably decide to kidnap and torture me. I mean, that's the only way this blogging thing can end right? Well I've said it enough times now that I might as well just say it again...

Watching a movie right now that’s giving me flashbacks to the horrific twist in The Dressmaker and having a miniature panic attack all over again (that cute fashion romance had no right containing that trauma within it NO RIGHT) pic.twitter.com/BPROAYDvZD

... movies scenes where characters are suffocated by [fill in the blank] traumatize me every fucking time. Always works. And it was with that headspace that I went into Silo, out today, a movie about a young dude working on a farm who gets stuck in a corn quicksand. This movie isn't explicitly a horror film -- it's more like an elongated countryfied episode of one of those Fireman TV programs that all the Boomers love. But I spent a lot of it covering my eyes and having a miniature panic attack all the same, because these situations make me a big ol' baby. Here's the trailer:

If you'd like to see Silo it's in theaters and streaming right now -- you can find out where on both counts on the movie's website. I'll add that the film has Jim Parrack from True Blood in a small role and gosh I missed him! Where has he been keeping himself anyway? 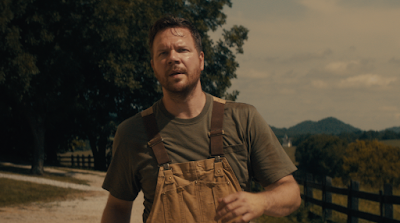 Parrack is on 911:Lone Star in case you didn't know

I also have the two issues you mention here. A fear of suffocation (several real life instances created this) and lust for Jim Parrack. I know you didn't say lust but, yeah, um....

Anon -- thx for the info on JP; it occurred to me to actually look him up as I posted this but it's much more fun to be lazy and wait for the answers to come to me ;)

Larry -- Lust is the correct answer

Appreciating the Jim Parrack love in this comment section! I've got it bad for him in 911: Lone Star since he's so hot and meaty. Really wish he'd get more work since, on top of being hot, he's also a good actor.

9-1-1 Lone Star is actually surprisingly entertaining. It has a sense of humor about itself and a great cast. It's good mind candy. Certainly it's better than the other formula shows of it's genre.