I am of mixed mind on the subject of LGBT characters requiring LGBT actors to portray them, but at a certain point it gets a little much for a not-out actor to keep taking on like one thousand gay roles without saying anything, and so I have to admit I am side-eyeing the news that actor Jeremy Irvine, who threw the first brick at Stonewall according to Roland Emmerich, is probably going to play Alan Scott, the openly gay Green Lantern character in the forthcoming HBO Max series. Yes this is the same series from Greg Berlanti that recently cast Finn Wittrock as another Green Lantern -- there will be time-jumping apparently...

"Scott was Earth’s first Green Lantern, who, true to the comics, is a gay man. He was created by Martin Nodell and made his comic book debut in 1940. A train engineer by trade, Scott derived his powers from a mystical green lantern crafted from a mysterious meteorite. He later joined the Justice Society of America, and in universe-hopping adventures would sometimes team with members of the Green Lantern Corps, including Hal Jordan. Based on the DC Comics property, the show was first announced in 2019 and was ordered to series last year. The story spans decades and galaxies, beginning on Earth in 1941 with Scott, and then heading to 1984 with cocky alpha male Gardner and half-alien Bree Jarta. They’ll be joined by a multitude of other Lanterns — from comic book favorites to never-before-seen heroes."

And, listen. If it was just the one role (this year) playing a gay man maybe I wouldn't say anything. But Jeremy Irvine is ALSO playing a gay man in Terence Davies next movie called Benediction, which I've talked here about several times before -- he's playing Ivor Novello, real-world sexually-conflicted movie-star and the lover of this film's main character, the poet Siegfried Sassoon (who's being played by Jack Lowden, current boyfriend of Saoirse Ronan and future boyfriend of me). This is just getting to be a lot without addressing the pink elephant in the room, Jeremy! 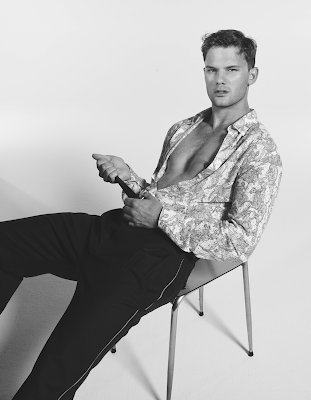 I'm not the biggest fan of poking around in an actor's personal life -- I gave up most gossip of that sort awhile back and it's suited me just fine. I have no idea if Irvine is actually gay or not, and I'm not trying to shove him out of any closet if he is. Maybe -- and this is hardly a stretch! -- the Roland Emmerichs and Terence Davies and Greg Berlantis of the world just like to stare at Jeremy Irvine. Like I said -- not a stretch! I sure like to stare at Jeremy Irvine myself.

But I feel as if we've traveled passed the rainbow rubicon with this dude at this point -- especially after the vociferous pushback that Stonewall got for feeling so white and weirdly un-gay (not to mention terrible, just terrible) -- and Jeremy Irvine needs to have some kind of a talk with us all at some point in 2021. I look forward to it, Jeremy! And until then we'll spend some more time doing what we normally do, just sitting quietly and politely and staring at you, after the jump...

I think it’s super tacky to cast a straight man for a queer superhero, considering how aggressively hetero the movies have been for the past twenty years.

I don't disagree, Anon. Especially since Marvel made that big to-do about casting a openly gay actor for the gay superhero role in Eternals and then cast an actor who is not (YET) out, Brian Tyree Henry

He's got kind of a vaguely Ethan Hawke thing going on. Except gayer.

When John Travolta comes out of the closet and plays a gay role AND wins an Oscar for it, then I think we can be more at ease with straight playing gay.

Irvine's biggest hit appears to be Stonewall (followed by Mama Mia, Here We Go Again). Critics hated it; audiences loved it. I had a hard time getting through it because it was a mess (nothing to do with the controversy about a black drag queen not getting the lead role or whatever that fritzle was about). Can't remember him in anything else but he came off as competent and a good looking male model in Stonewall. He must have something else going for him with all the work he's gotten; what is it?

Marsha P. Johnson is why we have Pride parades. That movie was a slap in the face to queer history.

Hi Jason, I understand your ambivalence, despite not knowing much about Irvine/Green Lantern/Ivor Novello. I have similarly mixed feelings about non-gay male actors playing gay male roles. Certainly if a gay man is just "a man who falls in love with other men" then surely any talented male actor can do that! But...being a "gay man" is more than that, isn't it? Being anyone is more than who you love and/or fuck!

Now I wonder if an equally if not more concerning problem is mainstream media's portrayals of who gay men are or what we do. Are we all world-renowned celebrities who look beautiful and have amazing sex? Of course not. Just think of all the fascinating, inspiring and yes sexy stories that are being ignored when yet another cute blond white guy plays a gay/queer role. I'm saying this as a white cisgender man myself.

I recently (finally) read We the Animals by Justin Torres after having already seen the movie. Yes, the main character experiences same-sex attraction but that's not his whole story. Both he and his family are achingly realistic people with complex emotions/lives. I hope more and more mainstream movies portray gay/queer people as real and complex not just beautiful/sexy (and mostly white) because if not, WE ALL LOSE.

And honestly the most "seen" or represented I've felt recently was watching the character of Lenu (Margherita Mazzucco), a (as far as I know) straight Italian woman in the series My Brilliant Friend. Witnessing her inability to express her feelings for the boy of her dreams as he runs off with her best friend...well I haven't experienced that exact situation but oof I still felt that deeply.

I actually don't care if he's gay or not. What I care about is that he was great in 'Stonewall'.

As long as he's an ally let him play any part he's suited for!