Can This Candy Man Can 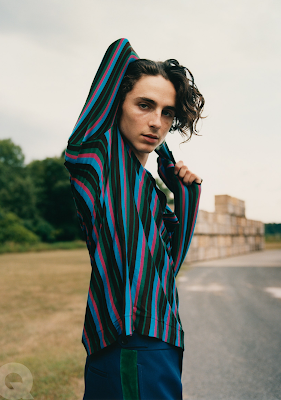 Of course most people's immediate reactions to today's news that Timothée Chalamet will be starring in a Willy Wonka prequel -- titled just Wonka -- has been to think of Gene Wilder's classic performance in the 1971 film, and I get that. But I have to admit that my first thought reading this news was actually of Johnny Depp, and this is coming from someone who's watched the 1971 film dozens of times and Tim Burton's abysmal remake starring Depp exactly once and that was one too many times. (Except for Missi Pyle, who was very funny, because when isn't Missi Pyle funny?) No I thought of Depp because Timmy's path keeps crossing with Depp, and Johnny Depp would not have been my first thought (or hope) if I was the person mapping out Timmy's adult career. 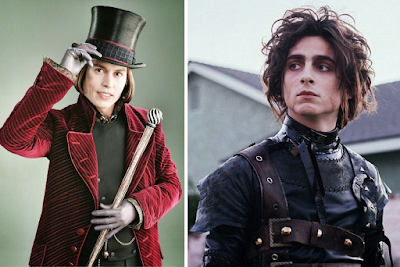 First and foremost there is of course the fact that Timmy dated Johnny's daughter Lily-Rose for awhile (I can't remember if they're still together), but there was also that Edward Scissorhands themed commercial that had Timmy playing OG Edward's son opposite Winona Ryder. The first time I thought of the two as linked was that uber-goth acting video Timmy did for The New York Times in 2017 during the awards-run for Call Me By Your Name -- it was very Sleepy Hollow, and if you wanna talk about a role you can picture Timmy in with great ease then I recommend you mentally face-map him onto Ichabod Crane. Real easy!

Anyway I don't think most people think Timmy is the problem with the Wonka news -- this rumor went around in January anyway, and everybody seemed to agree that Chalamet was a better pick than the other stated option on deck, Spider-twink Tom Holland. I think most people's problems with this news is just a lack of need with regards to this project in general. Who's thirsting for this movie? Hollywood seems real in love right now with Origin Stories a la the Cruella movie coming out any day now and I'll agree, they're just so lazy. If there's one good bit of news here it's that Paul King, the guy who directed the two Paddington movies, is directing this, and those movies unexpectedly ruled.

Jason, i was about to peruse your Grates Moments in Movie Shelves but the button doesn't work, it just leads me to imggb.com

Oh thank you for the heads-up hector, I will fix that in a bit! For now you can use this link :)

Why do we need this. I hope Roald Dahl's estate has something to say about it!

Hard pass. This poor dead horse has been beat enough.

Maybe it will surprise us and tie into WWATCF in clever and surprisingly poignant ways? The Top Chef spinoff Just Desserts had an episode bringing members of the original’s cast and I was very teary eyed seeing them being reminded how much that film meant to me. I’m hopeful-ish.

UGH. Timothee, why. WHY