Last night I showed you the cover of the upcoming New York Times Magazine with a shrieking Nicole Kidman paying tribute to the Horror of 2017 - well today the NYT dropped all of their "Great Performers" short films and they're all about giving the year's great actors little spooky-pants parts to play! What a joy! As you can see up top one of the movies stars our boy "Lil' Timmy Tim" Chalamet - in it he plays a Poe-esque cannibal. Watch:
.
There are also videos from Kidman, Cynthia Nixon,
Tiffany Haddish, Saoirse Ronan, and... JAKE!

Jake's playing a wall-scratching madman which honestly doesn't feel like that much of a stretch, I say with love. There are more than that but I've grown tired of listing names, head over to check it yourself! I have other things to get to, namely...

Right before I fell asleep last night I read this dumb article (aren't they all) talking about how We Are All Obsessed With Timothée's Hair - it's not the idea I find dumb (I love Timmy's hair), it's the fact that an article was written on this subject at all. But I'm gonna do them one better! If we're plunging into the abyss I'm gonna get there first, yo. In the "article" they warned Stranger Things' hairdo star Joe Keery that he should watch his back, his crown (made of hair) might maybe being snatched, so I figured that was our cue to ask... 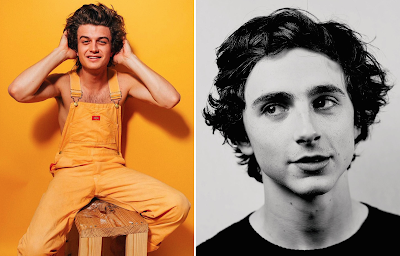 Let's not get crazy. Timothee can be the king of many things, but Joe's hair crown is undisputed.