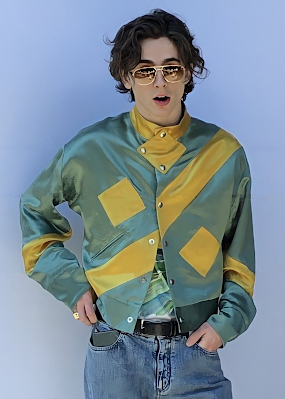 Did you hear the rumor going around earlier this week that the folks at WB are thinking about making a Willy Wonka prequel movie -- meaning they would like to tell the story of Lil' Willy and how he came to be the King of Chocolate... not to mention the slaver of untold Oompa Loompa millions -- and that the two names in contention for the lead-role are the Spider-twink Tom Holland and the peach-fucker Timothee Chalamet? Before I get to my logic in my own choice between those names I will just ask you to choose...
free polls
As for me I personally think, out of those two names, that Timmy's the better pick. I love Tom but there's something unabashedly normal and practical about him, which works well for his Peter Parker, grounding him inside the MCU's big flights of fancy. Hhe brings a ton of heart to the films, which is why the end of Infinity War is such a gut-punch. But as great as that is I don't think any of those qualities are what you want from a Young Wonka? Timmy's got the boyish enthusiasm but at an angle -- a little wacky, off-center, too much. He'd be a better fit, in my own humble pie opinion. Although it must be said...

Classic characters reimagined has a cool ring to it.....if I was an actor I would never play a character done before. Especially one done couple times before.

No. None. I hate “origin stories”.

Whoever it is will just end up doing a pastiche of Wilder and Depp so it doesn’t even matter, frankly.

A wasteland of casting.

tom has serious charlie bucket energy I can picture Timmy as a young Wonka but id prefer a wilder like Ryan Gosling's performance because they look a little alike and Ryan loves him but also because id like to see him direct some of that nonchalance he has been providing in recent years towards a wackier direction. Take off your cool Ryan Gosling.