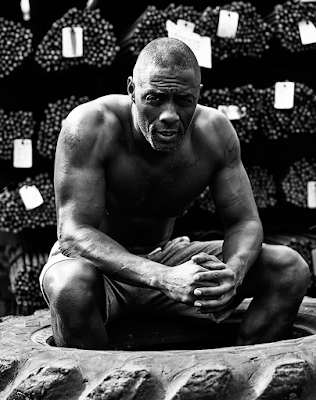 I used to on the semi-regular do rounds-ups of what was out on a Friday and tell you what I thought about them, if I had seen them. But it's so confounding to me now, what is out when and where and all that jazz, I really haven't done that so much in the past fourteen months. But I'm gonna try now! I seem to have a decent enough grasp on this weekend, and there's enough good worth seeing for me to try. So, uhh, let's start with the one I don't know about -- Concrete Cowboys, starring Idris Elba, is out on Netflix today. I haven't seen this! But...

... clearly I will see this. I did share some more images from this movie back around the time it was set to in Toronto last year, by the way. Moving on to better-known-by-me things, a little something called Godzilla vs Kong is already in theaters and on HBO Max and has been for a couple of days, so I am guessing some of you've already seen it? But maybe you missed my review at Pajiba -- that is right here. I gave it a solidly positive review but I gotta say the film lingers nice, and I've been wanting to re-watch it all week. That's a good sign! It doesn't feel totally disposable! It's also been a fun meme-maker on Twitter all week, which helps.

Next up there's the movie I literally linked to in the post right before this post you're reading right this minute, and that's the director's cut of the bio-pic Mapplethorpe, which I also reviewed this week for Pajiba -- I was far less kind to this one, and with good reason. It's a movie about artists that feels like it hates artists? Like, I get it, Robert Mapplethorpe was an asshole. But he was a compelling asshole! He compelled that bull-whip right on up his asshole, for starters! 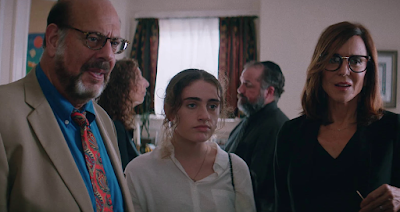 Anyway. Me and that movie are done. Moving on. In much happier news Shiva Baby, the anxiety-inducing new claustrophobi-comedy that I reviewed at NewFest last fall, is out online this weekend as well, and that'll give you a much better, sharper, even gayer time. Love that one -- I also posted the trailer right here. It's available for rental on Amazon and probably other places. Recommended highly!

And lastly but also finally there's a flick called Funny Face, also available for rental on Amazon, that I'm also recommending. I don't know if y'all saw the film Dark Night in 2016 about a movie-theater shooting (that movie is on Amazon Prime if you haven't) but Funny Face is from the same director Tim Sutton, and he's proving himself a somebody to watch. He's pretty clearly heavily influenced by Nicolas Winding Refn, but then everyone should be influenced by Nicolas Winding Refn if you ask me. So good on ya, Tim! 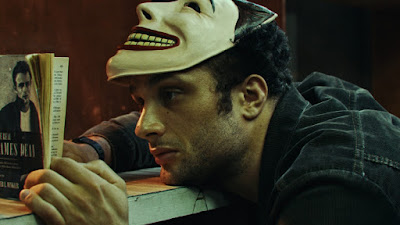 Funny Face stars Lady Macbeth's Cosmo Jarvis -- who we've posted about quite regularly -- as a not-quite-right dude who keeps wearing an unsettling mask around his Coney Island neighborhood at night, making everybody uncomfortable. He makes friends with an orphaned young woman (Dela Meskienyar) and silently vows revenge against the wealthy real-estate scion (Jonny Lee Miller) who's bulldozing his childhood home and all of this wanders off into unexpected and weird directions, maybe not always hitting its marks one hundred percent, but remaining fascinating throughout.

Cannot believe I never saw this before, I guess it took this specific hair, but the bf just pointed out how much Cosmo Jarvis looks like James Caan and now I will never ever un-see it -- it's friggin uncanny at moments pic.twitter.com/7yYs7N01EE

Cosmo goes hard on a lot of tics in his performance yet I didn't hate it like I often do with that kind of thing; I found and find him immensely watchable. He's proven time and again to be a talented guy, and this is an odd, memorable performance in an odd, memorable film. It's got stellar atmosphere, also -- nothing has made me want to get out of the local neighborhood I've been trapped in for a year now thanks to COVID harder than this movie did. Funny Face has got NYC vibes bursting out its eye-sockets. It's a slow-boil, but I think you'll dig it if you're in the right mood. Here's the trailer: