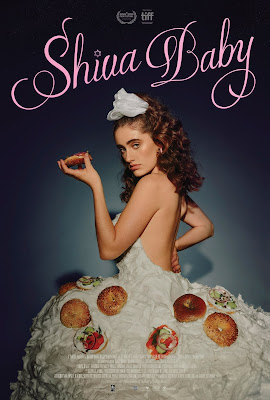 Okay that poster, for the forthcoming comedy Shiva Baby, is amazing -- as amazing as the already amazing movie, maybe even more so. I told you guys when I reviewed this movie for NewFest last fall, that this movie is "a laugh riot, and hopefully the announcement of two vital new voices in comedy." I was speaking of its writer-director Emma Seligman and its lead actress Rachel Sennott, who gift us with an already-classic here as far as I'm concerned. (With a special shout-out to Molly Gordon in a supporting role, whose every line-reading is gold.) Sennott plays Danielle, an eternally-unimpressed young woman forced to attend a shiva (basically a Jewish wake) alongside the married man she's fucking...

... (an understandably fuckable Danny Deferrari), his hyper-blonde shiksa wife, and oh right her own ex-girlfriend Maya (played by Gordon). The movie happens basically in real time, and basically in the most claustrophobic house you have ever fallen into in your entire life, and wrings its top-form comedy from the space quickly closing in around Danielle. They're dropping this movie on VOD on April 2nd and I can't recommend it enough. Here's the trailer:
Who? Jason Adams When? 3:02 PM
Labels: NewFest, trailers

i have known Danny for years. I will now be sending him this to use your pull quote on his resume. Perfection.

LOL awesome! I meant every word

My friend was a producer on this movie. It is an amazing film and so cool to see it get publicity on this blog!

The trailer makes it seem like a thriller....can't wait to see it!

Wow congrats to everybody associated by proxy with this movie, it really is super-great and will hopefully become the classic it deserves to be -- I very much loved it