Comedy is so hard to do, especially -- and this is the real sticking point since I'm the one writing this review -- when it's me specifically that you're trying to amuse. I've admitted this before here but I can be a true deep pain in the ass when it comes to mustering laughs -- a real drawing water from stone-face type. You lean too far in either direction and my countenance is quick to penalize -- I want you to walk on a tightrope, one on fire, for me, and no less. So believe me when I tell you that write-director Emma Seligman's Shiva Baby, screening tomorrow for NewFest, didn't just tap impossible springs, it flooded my damn basement and right on up to the first floor.

I might've lost the narrative in there a bit so let's put it as straight as this queer movie deserves -- Shiva Baby is a laugh riot, and hopefully the announcement of two vital new voices in comedy. The first being Seligman, whose low-key approach and wizardry with timing is about as on-point as can be with making quick comedy of character and vice the versa. And the second wonderful new voice being Shiva's leading actress Rachel Sennott, who can just totally be in everything from here on out, please.

Funny enough Sennott's actually on her way towards exactly that with NewFest this year, as she's also one of the leading actors in Olivia Peace's dark high-school comedy Tahara, which is also screening at the fest. I'll put a pin in proper Tahara thoughts until it screens on Friday, but talk about a divined double-feature -- both films have Sennott playing a bisexual Jewess being confronted by her promiscuous peccadilloes whilst attending a funeral service, which is quite the specific role to take total ownership of. But own it she does, and in surprisingly different ways -- Tahara's Hannah Rosen and Shiva Baby's Danielle come across as very different people! 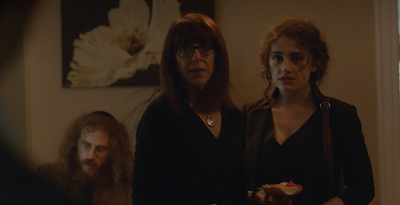 While the two films were apparently filmed near enough that they're both coming out this year in Shiva Sennott seems markedly older -- Danielle needs to feel old enough that everybody's able to constantly, loudly wonder what the hell she's doing with her life post-high-school, and Sennott nails the early 20-something flailing ennui thing; that precise not-a-baby but wanna be treated as such vibe where you'll try to suck a married dude's dick in one room while petulantly whinging at your mom in another; that thing. Y'all know that thing. We've all had that thing. Haven't we?

Shiva Baby keeps itself tight and contained to one day's events, growing tighter by the second -- never has one event as the event of the title ever felt so terribly, traumatically claustrophobic. Perfectly built and crescendoed dominoes pile and fall for good gag after good gag, all closing in on Danielle until the room's spinning, blood's flowing, baby's are screaming... it's grand farce shit at the human level, where decisions we understand yet immediately regret spiral into an obscene twister of visceral emotional comeuppance. You know, that thing. We've all had that thing.

Shiva Baby isn't just The Sennott Show by any means -- she gets fantastic support from Polly Draper as her mother; Danny Deferrari as her gratuitously-bearded and impossible beau; Fred Melamed of A Serious Man awesomeness as her seemingly clueless dad; a well-timed appearance or two by the always-welcome Jackie Hoffman; Glee's Dianna Agron as the ice-cold business-shiksa in residence; and most importantly Molly Gordon as Danielle's life-long best friend with benefits Maya, who might just rival Sennott for her guffaw-to-line ratio -- Gordon gives a one-woman masterclass in hilarity, knocking her every second out of the park, around the globe, and through the back window. I absolutely love this funny, funny movie! 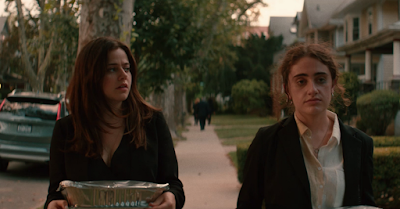 Any buzz on Dry Wind?

I have a screener but I haven't gotten there yet! Later this week!