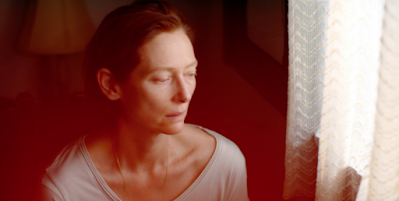 Actually being on reputable movie press lists now makes me feel all grown up and semi-respectable! It is weird! But a good weird, like when the taxi hits a pothole just right. There, phew, I am no longer burdened with feelings of respectability. That was a close one. Aaaaanyway to get to my point I got the 2021 slate for the studio known as Neon this afternoon -- they're the fine people behind gems like Portrait of a Lady on Fire and Ammonite and other movies not about lesbians on the water (here is that joke, but better) and there were several bits that caught my eye -- like the above photo, the first I've seen of Tilda Swinton in director Apichatpong Weerasethakul's new movie called Memoria! It's described succinctly as being about "a Scottish woman who beings to notices strange sounds while traveling through the jungles of Colombia." Oh look, another photo: 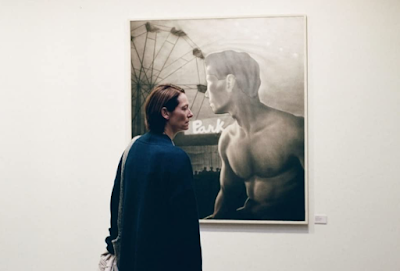 That one's off of IMDb, although they don't have much more information than that tagline. We do know the film co-stars the great Spanish actor Daniel Giménez Cacho, so wonderful in Zama and We Are What We Are (the original one) and Blancanieves and Bad Education. Also bit of trivia -- he was the narrator of Y Tu Mama Tambien. Anyway no word on when Memoria is coming out other than "in 2021" but we'll surely stay tuned. Also of note on Neon's list of 2021 films... 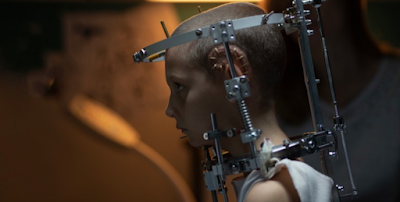 ... is Titane, the new one from Raw director Julia Ducournau! After Raw we'd follow Ducournau anywhere, and this one's also got a killer cast with French actors Natalie Boyer and Vincent Lindon -- sidenote, I can't see Vincent Lindon without immediately thinking happy thoughts of the terrific film La Moustache, which I've posted about previously and always recommend. Anyway Titane is described thus:

"A young man with a bruised face is picked up by airport customs officers. He claims to be Adriane Legrand, who disappeared as a child ten years ago. For Adriene's father Vincent, a long nightmare has finally come to its end, and he takes the young man home. At the same time, a series of gruesome murders is ravaging the area..."

That ellipsis at the end of that description is doing a lot of heavy lifting! Still, knowing Raw, I feel like things might not work out in this father's favor. But I do love Ducournau's angle on plopping horror down among a family full of secrets -- it's a great space. No word on Titane's specific release date yet either, but I will surely let y'all know. Other films of note on Neon's slate -- speaking of Portrait of a Lady on Fire director Céline Sciamma's new one Petite Maman is set for "Fall 2021," while Spencer, director Pablo Larrain's Princess Di bio-pic with Kristen Stewart, is set for "Winter"... oh, and the great and animated gay refugee movie Flee, which I saw at Sundance a couple months back, is also hitting in the fall.